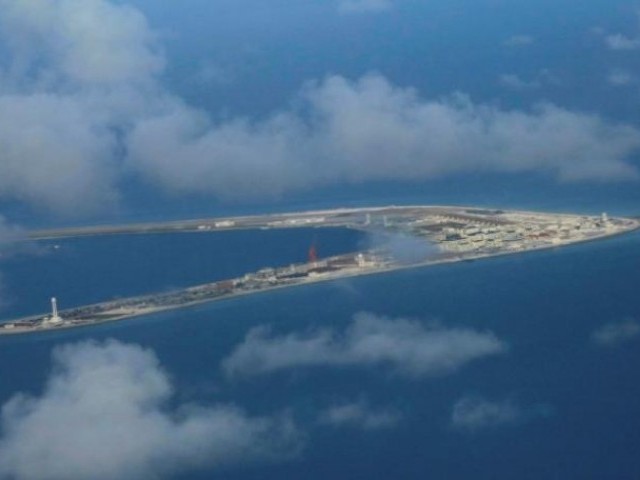 WASHINGTON: Two Chinese fighter jets intercepted a US Navy surveillance plane over the South China Sea on Wednesday, with one coming within 200 yards of the American aircraft, US officials told Reuters.

The officials, speaking on condition of anonymity, said initial reports showed that the US P-3 Orion surveillance plane was 150 miles southeast of Hong Kong in international airspace when the Chinese aircraft carried out the unsafe intercept.

One Chinese aircraft flew in front of the American plane, restricting its ability to maneuver. The Pentagon confirmed that two Chinese jets had carried out the intercept, saying it was “unsafe and unprofessional.”

“We continue to review the facts of this incident and will convey our concerns through appropriate channels with the Chinese government,” Pentagon spokesman Navy Commander Gary Ross said in a statement.

A US Navy warship sailed within 12 nautical miles of an artificial island built up by China in the South China Sea, US officials said on Wednesday, the first such challenge to Beijing in the strategic waterway since US President Donald Trump took office.

China is deeply suspicious of any U.S. military activity around its coastline, especially in the resource-rich South China Sea, parts of which are disputed by China and its smaller neighbors, including the Philippines, Vietnam and Malaysia.

In first under Trump, US warship challenges Beijing’s claims in South China Sea

Incidents such as Wednesday’s interception are not uncommon. Earlier this month, two Chinese SU-30 aircraft intercepted a U.S. aircraft designed to detect radiation while it was flying in international airspace over the East China Sea.