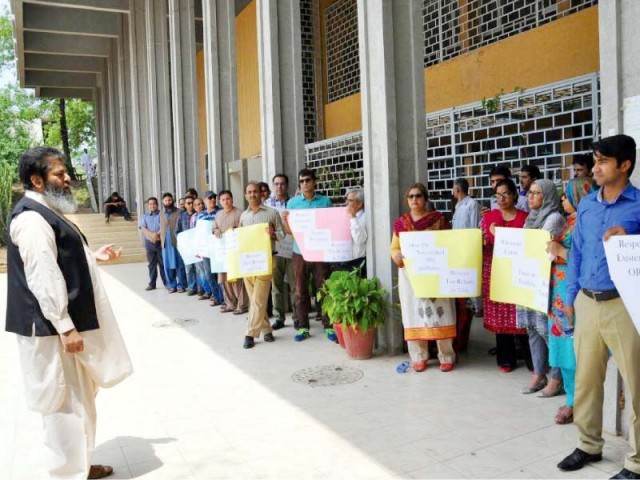 Teachers protest over the government’s decision to reduce the tax rebate. PHOTO: EXPRESS

ISLAMABAD: Teachers of public sector universities on Wednesday observed a black day as they demanded the restoration of the tax rebate of 75 per cent for varsity teachers in the upcoming budget.

The teachers from the Quaid-i-Azam University (QAU), International Islamic University Islamabad (IIUI) and the Allama Iqbal Open University (AIOU) staged a protest on the call of Federation of all Pakistan Universities Academic Staff Associations (FAPUASA) Islamabad Chapter for the restoration of the tax rebate for university teachers.

The rebate had been suspended by the government during the 2013-14 budget.

The protesting teachers demanded that university teachers should be facilitated to avoid brain drain.

They said that a number of scholars and teachers had already left Pakistan owing to lack of resources and fewer wages.

“The government should take appropriate measures to facilitate the teachers and researchers if they want quality education in Pakistan,” said Dr Shehzad Ashraf Chaudhry while speaking at the protest rally held at the IIUI.

He said in western countries, university teachers are given tax rebates, higher salaries and other perks and privileges which are why these countries are developed. By contrast in Pakistan, he said that teachers are still paid poorly. He further demanded to increase the teachers’ retirement age to 65 years instead of 60 as is practised for judges of the higher judiciary.

At the QAU, where a large number of faculty members had gathered for a token protest in front the varsity’s central library, representatives of QAU Academic Staff Association (ASA) expressed their dismay over the reduction in tax rebate from 75 to 40 per cent on income for researchers and academic staff.

They lamented how their demands – being made since 2015 – had yet to be fulfilled. They added that the government seems reluctant to facilitate the teaching community but when it comes to roads, airports, metro buses, the government does not show any restraint.

ASA President Dr M Ishtiaq Ali said that the rebate is one of the few incentives granted to Pakistani academics by the government. He pointed out that the government seems to be wasting hundreds of billions of rupees in subsidising corrupt and inefficient state-owned enterprises or granting subsidies to failing non-competitive and cartelized sectors but had no money for the higher education sector.

It appears that the government wishes to punish those who perform better and reward those who are an unsustainable drag on the entire economy, he said.