K-Electr­ic has been taken to court over heatwa­ve of 2015
By Our Correspondent
Published: May 25, 2017
Tweet Email 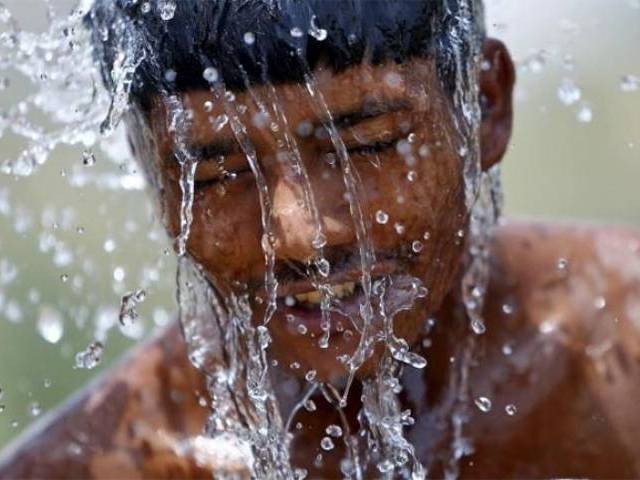 Around 1,000 people died in Karachi during the heatwave in 2015. PHOTO: REUTERS

KARACHI: The Sindh High Court (SHC) directed on Wednesday K-Electric (K-E) authorities to appear in person to explain the measures they were adopting to control unannounced power suspension in the city.

A two-judge bench, headed by Justice Irfan Saadat Khan, directed them to appear in court on May 29 with the comments. The bench was hearing a petition filed by civil society members seeking a judicial inquiry into the deaths of as many 1,000 citizens during the heatwave and prolonged power outages in the city in 2015.

Advocate Faisal Siddiqui, who represented the petitioners, told the judges that a petition seeking corrective measures was filed after dozens of residents of Karachi had died during the heatwave and electricity load-shedding in 2015. However, no corrective measures had been taken by the K-E management, he alleged.

He accused that the electricity load-shedding situation had worsened in the city in the increasingly hot weather as the K-E management was resorting to hours-long ‘unannounced’ suspensions of power in different parts of the city, despite the issuance of clear directions by the National Electric Power Regulatory Authority (Nepra). This has exposed the citizens to difficulties in the hot weather.

A bench member observed that a number of people had died due to electricity load-shedding that had been taking place when the city experienced the heatwave of 2015. “Is K-Electric still waiting for more people to die?” a bench member asked.

He inquired whether or not the K-E management or Nepra could control the unscheduled power suspensions.

However, Advocate Siddiqui alleged that the K-E management was carrying out ‘discriminatory’ power suspensions as the residents living in the outskirts and poor localities of the city were experiencing prolonged power outages as compared to other areas.

He pleaded to the court to ask the K-E management why it was carrying out the practice of discriminatory and unannounced electricity suspensions.

Therefore, the bench directed the K-E authorities concerned to appear on May 25 along with details of what measures they had taken to control unannounced load-shedding of electricity.

The petitioners, including singer Shahzad Roy, had said that over 1,000 persons had died and 40,000 others suffered heatstroke during the heatwave but the federal and provincial governments failed to understand the seriousness of climate change, despite several warnings. They had blamed the federal and provincial governments for not declaring a state of emergency until June 23 – when 426 people had already died.

The petitioners claimed that K-E had failed to provide uninterrupted power supply that could have eased the suffering of the citizens. Therefore, they had pleaded to the court to constitute a judicial commission, headed by a retired judge of either the high court or Supreme Court, to establish reasons for the deaths and hold the government functionaries responsible for their failure to take preventive measures. The court was also requested to ascertain K-E’s role during the heatwave, as it had failed to provide uninterrupted supply of power to citizens.

To woo the working class, Sindh govt to add 50,000 jobs in budget