Medics focuse­d on LRH which has larges­t number of patien­ts coming in
By Our Correspondent
Published: May 24, 2017
Tweet Email 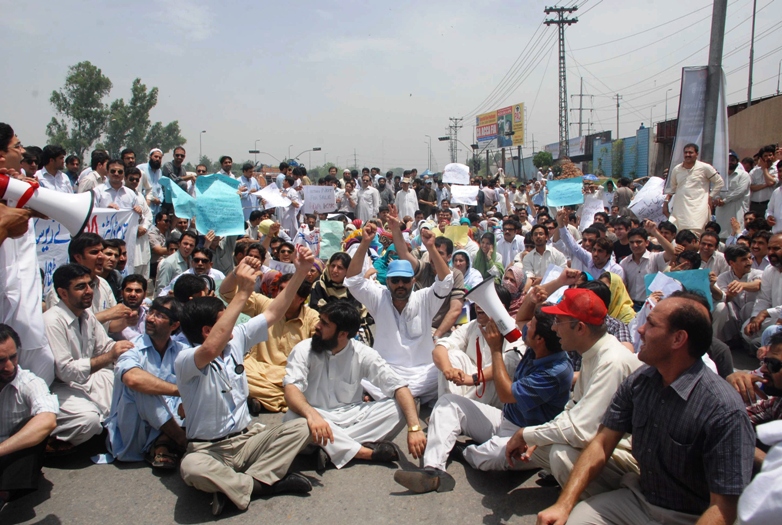 Medics focused on LRH which has largest number of patients coming in. PHOTO: FILE

PESHAWAR: Having failed to reach an amicable and mutually acceptable resolution to their issues with the K-P government, members of the Young Doctors Association (YDA) boycotted their duties, locked the outpatient departments and a few wards in Peshawar leaving patients in distress.

The lockdown started early on Tuesday morning at three different tertiary care hospitals in the provincial capital since YDA had announced a province-wide strike in favour of their demands.

Being the largest health institution across K-P, the protesting medics focused their efforts primarily on the Lady Reading Hospital (LRH) since a sizeable number of patients from across the province visit it daily

Although some senior doctors at LRH went about their daily duties they could not access wards and other departments since their locks had been jammed. Consequently, they opted for plan ‘B’ and started providing outpatient department services at the facility’s accident and emergency department.

The YDA, however, managed to attract the attention of incoming patients as YDA President Dr Amjad addressed them. He assured them that YDA did not want to create problems for patients but that they (YDA) had been compelled since the government was reluctant to fulfill their [doctors] demands.

LRH Medical Director Dr Khalid Mehmood told the media since they were aware of the strike, doctors from the casualty department were assigned to provide OPD services. Post Graduate Medical Institute (PGMI) Dean Dr Arshad Javed stated LRH had nothing to do with the doctors’ demands since the doctors have issues with the health department.