Seafoo­d from Gwadar was presen­ted at a tastin­g event in Karama­y
By News Desk
Published: May 22, 2017 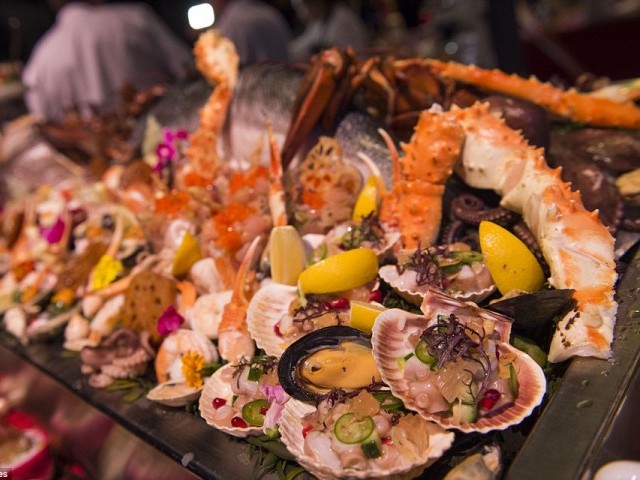 Two tons of deep-sea seafood arrived on Saturday on the tables of residents of Karamay, a city in Northwest China’s Xinjiang Uyghur Autonomous Region, after traveling 34 hours from Gwadar port in Pakistan, domestic media reported on Sunday.

The seafood was presented at a tasting event in Karamay, where locals scrambled for samples of the seafood, with many making purchases on site, www.ts.cn reported. “It’s fresh and has a delicate flavor,” one resident said at the event.

At the airport, workers loaded the seafood onto trucks for transport to Karamay. At the comprehensive agricultural development zone in Karamay, workers from the Karamay-based Xinjiang Yufei International Fishing Co put the seafood into a refrigerated warehouse. To guarantee freshness, workers put the seafood in secure packaging in line with international standards and added dry ice to each container, said Ma Jinglu, manager in Yufei’s administration division.

Pakistan to export seafood to China via land route

The seafood from Gwadar will also be showcased on Saturday at an event where Yufei will open a display hall for three days to allow visitors to try the seafood. “After this event we will also have a flagship store, and later we will import more kinds of Gwadar seafood to Karamay,” Ma said. “The seafood will be sold both online and offline, allowing people to order the seafood to their homes with a press of a finger on their mobile phones.”

Yufei General Manager Luo Jun said the company is already preparing to import two more shipments of seafood to Karamay. Yufei, which was set up in Karamay in March, established a branch in Gwadar port in May, becoming the first Chinese enterprise to own a business license in Pakistan. The company has invested as much as US$74 million to establish seafood freezing workshops, seafood deep processing workshops, an ice making factory, a sea water desalination factory, a packaging factory and a maritime scientific research center in Gwadar.

Ma said that Chinese companies have received a warm welcome in Pakistan and the Pakistani government has supported Chinese companies there. Besides, the railway project between China and Pakistan will also largely cut the cost of shipping seafood. “We will send Gwadar’s seafood to Shanghai, Guangzhou, Beijing, Karamay and Urumqi. We also plan to sell it to Dubai and Iran in the future,” Ma said.

Luo noted that the Belt and Road initiative has provided a rare opportunity for his company. “The local government of Karamay has established a good platform [for such trade], and residents in Pakistan also strongly support the platform as it has increased local revenues,” Luo said.

Karamay and the Gwadar region became “friendly cities” in 2015, as the Belt and Road initiative proceeded.

A Pakistani economist said that the corridor between Xinjiang and Gwadar will start operation in May 2018, and by the end of 2020, up to 4 per cent of global trade will make use of the corridor, Reuters reported on May 12. Around that time, Pakistan will get transit and rent revenues amounting to US$6 billion to US$8 billion a year.

This article originally appeared in the Global Times.