Finall­y, there's eviden­ce that leadin­g ladies from Pakist­an need to be explor­ed beyond crisp dictio­n and good looks
By Rafay Mahmood
Published: May 22, 2017
Tweet Email 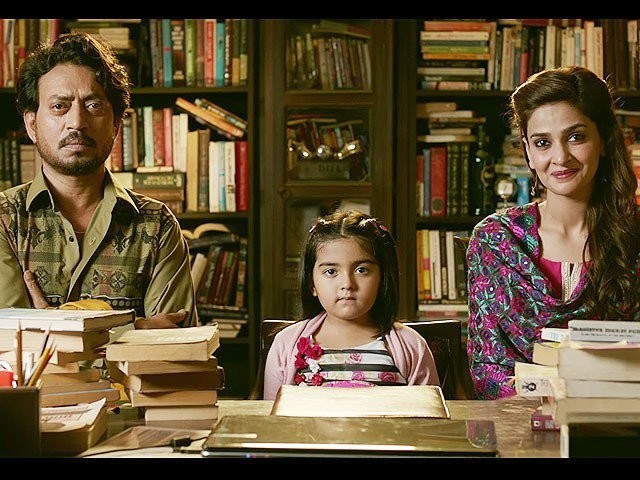 KARACHI  : For someone who doesn’t follow TV at all, Saba Qamar’s effort to induce vigour into the otherwise lazy and pointless Lahore Se Aagey came as a huge surprise. This woman wanted to act and exhibit what she is capable of but the canvas was too narrow for any exuberance and all that shined through were her looks and Western attire snags. In simple words, Saba didn’t have a Bol to launch her film career in Pakistan but neither did she choose a Raja Natwarlal to follow it up.

Somewhere between a stroke of luck and genius, Saba found Hindi Medium and at the heart of it, her arrival in B-Town, with effortless grace, speed and strength.

As someone who is strongly against supporting anything Pakistani just because it’s Pakistani, I must confess that Saba drives this Saket Chaudhary masterpiece as Irrfan Khan steers it in the right direction.

Hindi Medium revolves around a newly-rich, Chandni Chowk couple that doesn’t want their daughter to go through what they did in a government school, just because their parents couldn’t afford anything else. Now that they have the means, Mittu (Saba) and Raj (Irrfan) finally decide to get their daughter admitted into the Delhi Grammar School only to realise it takes a lot more than money to get accepted in an education system that relies heavily on class supremacy.

This is where the couple’s race against time and complexes take us through a world full of reality checks without being as preachy as you’d expect a mainstream Bollywood film with a ‘message’ to be.

Saket’s brilliance as a director, and Zeenat Lakhani’s as co-screenwriter, lies in the depth of their understanding of the issue at play. But as they say, an idea not expressed is not an idea. Saket complements a relatable issue with a carefully crafted plot, one that could have easily drifted away into the lead characters’ personal conflicts. There are quarrels but not pointless fall outs and the fact that the film still manages to hold on to its drama, both, happy and sad, makes for an outing that forces you to think while being entertained. Why to say something when you actually have something to say is perhaps the biggest lesson local film-makers and screenwriters can learn from Hindi Medium.

However, the crudeness of the issue couldn’t have been communicated as powerfully, had it not been for such an exceptional set of actors. Saba’s eagerness to fit in where she doesn’t belong reflects as much in the edginess of her posture as it does in the volume of her forced vocabulary and Irrfan, quite organically, gives her enough room to dominate and she makes the best out of it.

Irrfan on the other hand looks and acts like a common desi person and all he had to do was to take out his angst against our post-colonial hangover and the rest, like always, is garnished by his impeccable timing.

As a whole, Hindi Medium is a very important film that drags marginally towards the ending. The class divide among the English speaking crowd and the not so well-versed also exists in Pakistan and the fact that we consider ourselves ‘accommodating’ by letting ‘them’ behave however they want, within their own clout and space, as ‘we’ continue to do in ours is the real problem. This is not pluralism; it is one of the primary forms of racism and Hindi Medium holds a mirror to that.

Verdict: Hindi Medium has done for Saba what Kapoor & Sons did for Fawad and its a treat worth your money

Priyanka Chopra is done apologising for her accent