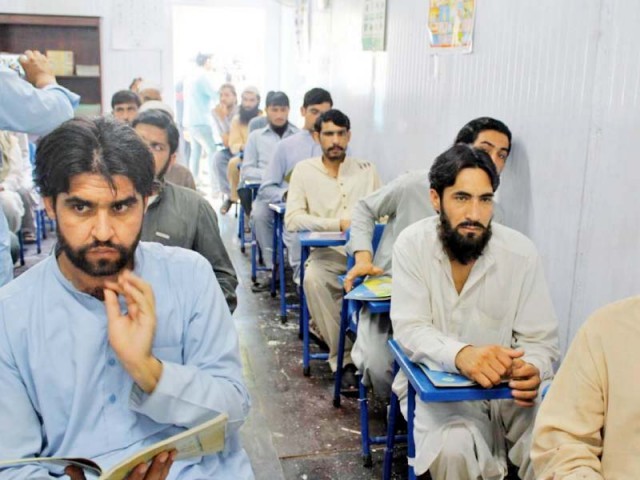 PESHAWAR: In order to bring back prisoners into the mainstream and to rehabilitate them through the medium of knowledge and education, Khyber Pakhtunkhwa [K-P] government on Saturday inaugurated an adult literacy and non-formal basic education center at Central Jail Peshawar.

K-P Elementary and Secondary Education Minister Muhammad Atif Khan inaugurated the centre along with a  prisoner Muhammad Faheem who had graduated with MSc Economics from Australia and is a  prisoner at Central Jail Peshawar since the last  five years.

Under the speed literacy program which is the fastest  method developed by Vision21 to educate illiterate children and adults up to primary level in one year, initially 30 prisoners have been enrolled in this container classroom. A library comprising 2000 different books was also inaugurated with the support of a non-profit organization Katabi at central Jail for prisoners.

Talking to The Express Tribune Faheem who is a prisoner in Central Jail Peshawar and will teach the students said that all the prisoners are eager to get education but don’t have the opportunity. He appreciated the government for its efforts and offered his services voluntarily to the students.

Faheem who had been arrested by FIA and sentenced to 15 years in prison, said that today he is very happy to help other people. He said that the prison is full of illiterate people and they are keen to acquire knowledge.

A prisoner Attaullah said it a golden opportunity for us to learn some things here. “First we were unaware of the value of education but now we realized that education is vision to the eyes,” the prisoner said.

Education minister Khan said that the motive behind this initiative is to bring back the prisoners into mainstream through knowledge and education.  He said that the setup in Peshawar jail is for prisoners who want to continue their education and also get acquainted with what’s happening in outside world. He said that first a prisoner Faheem had taken responsibility of teaching and government will pay  him while in future they will hire proper teacher for this school.

For female prisoners, misery and disease in K-P jails

He said that the basic aim of this initiative is to provide education facility to prisoners and make them good and dignified citizens of the country. Khan said that they would live independent and graceful life when they free from prison.

Education minister said that this initiative will extend to other province jails and also planning to provide education facility for female and their children locked in jails.