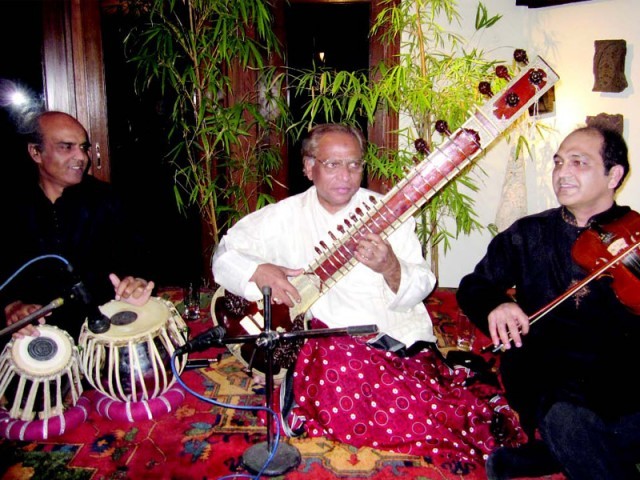 The three maestros enthral audience, each through his own craft in an appealing composition. PHOTO: FILE

Think classical music and the mind conjures up Ravi Shankar and other internationally-acclaimed maestros who introduced the music of the South Asian subcontinent to the western world.

The Asian Study Group organised a recital for connoisseurs of classical music on Thursday, drawing a generous turnout at the Belgian Ambassador’s residence.

Sounds of sitar and tabla emanated from the house, amid awed silence as people focussed on every note, interjecting with “wah wah” and “bahut khoob”.

The room radiated an ethnic feel; earth tones dominating the sofas, Afghani-printed carpets and floor cushions making for seats, in addition to the chairs spreading out till the rear end of the room. On the fireplace sat a miniature Buddha, accompanied by gold orbs of Central Asian origin in brass backdrop.

Angled out, on a chauki,
sat two men amid a pair of tablas in sitar, dressed in black and white kurtas and a shawl of ajrak.

What started out as solo performances, intertwined notes in mid-air complemented one another, reaching a crescendo, flying off on tangents and recollecting in unison.

Muzaffar Akbar Khan was born in 1947 in Saharanpur, an important city in the state of Utter Pradesh in northern India. His passion for music took him to Bombay (now Mumbai) at a very young age. There he came under the tutelage of Ustad Muhammad Khan, a distinguished Sitar player of the Mewat Gharana who happened to be the father of present day sitar maestro Ustad Rais Khan. In the 60s, they migrated to Pakistan. He is now based in Lahore.

He presented Yaman Kalyan, a raga typically played during the evening. The notes, soft at first, flew on less subtle tangents. The audience swayed gently, with an almost meditative rhythm.

Joining the ranks was Muhammad Ajmal, an outstanding tabla player, who lent his expertise to rhythmic accompaniment. He is a disciple of Ustad Mian Shaukat Hussain, an exponent of the famous Punjab Gharana.

His rendition was systematic; the echoes of tabla mingled with reverberating sitar, forming an oddly refreshing mix.

A west-meets-local civilisation hybrid, the instrument took firm roots in the local musical ethos of the subcontinent since colonisation and trans-cultural pollination. Incumbent of western influences, the instrument played a very local beat at the event.

Asad Qizibash, an accomplished and well-known Sarod player, actually started his musical journey as a violinist under the tutorship of his late father who himself was a virtuoso violinist. He amazed the audience by performing some of his favourite ragas on the violin.

“It was a real treat. The synchronised rhythm of all three performers really brought the house down. Definitely superlative,” commented Shaheen Khattak, a member of the audience.