JI to renew protest against K-Electric from May 24

JI to renew protest against K-Electric from May 24 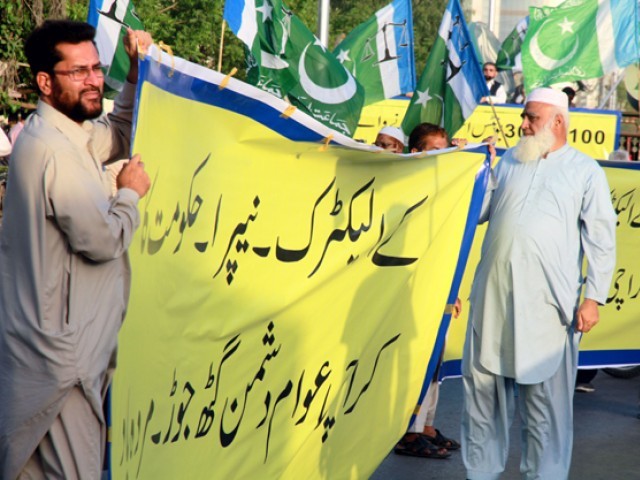 The protesters were unhappy with K-E's over-charging and high tariffs. PHOTO: ATHAR KHAN/EXPRESS

KARACHI: A few weeks after calling a halt to its series of protests against overbilling and increased electricity tariffs, Jamaat-e-Islami (JI) has announced it will hold another sit-in against K-Electric (K-E) as the 15-day deadline to accept their demands has lapsed.

He was addressing a press conference at Idara Noor-e-Haq, the party’s headquarters in Karachi, after the completion of the 15-day period given to K-E by Governor Mohammad Zubair to fulfil JI’s demands.

“We will protest against K-E on Sharae Faisal near the Nursery bus stop on Wednesday, May 24, at 5pm,” announced Rehman, adding that the protest will be peaceful.

JI had called off the sit-in against K-E outside Governor House, when Zubair had assured the party that he will ensure provision of substantial relief to the people in connection to K-E’s policies.

The party will hold a sit-in against the power company on May 24 as the governor failed to keep his word and K-E has increased load-shedding, according to Rehman. He also said that JI would approach NAB against K-E’s misdeeds. The JI Karachi chief said that forcing people to face load-shedding while shutting down power generation plants is the worst form of corruption. He accused the utility provider of minting huge sums of money from the people.

Rehman said the frequent load-shedding, tripping feeders and power failures were due to the evident incapability of the K-E management. He said the power company was forcing the people to go through prolonged power outages amid rising temperatures, especially at a time when hundreds of thousands of students in the city were appearing for their exams.

In the recent past, thousands of people died due to power outages and a heatwave that engulfed Karachi, said Rehman. To prevent this, JI has not only held a series of sit-ins outside the K-E head office this year but also approached the federal government through the National Electric Power Regulatory Authority and knocked the doors of the judiciary. He said that a case filed by JI against K-E is pending before the country’s top court.

Speaking about their future course of action, he said that complaint camps would be set up outside various K-E integrated business centres in order to provide relief to affected people. He added that camps would also be set up across the city on May 22 and May 23. Meanwhile, a one-million petition campaign would also be initiated, he said.

The JI leader also said the administration and government will be held responsible if the scheduled sit-in is interrupted or sabotaged. The party has been protesting against K-E since March.