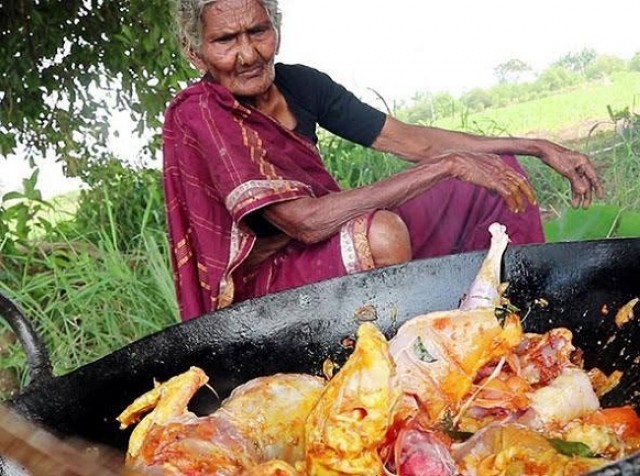 They say you can’t help getting older, but you don’t have to get old. This great-grandmother from a remote Indian village is proving just that.

In with the times, albeit not by choice, Mastanamma is a YouTube star with over 300,000 subscribers. The talented YouTube star believes she is about a 106-years-old although she does not have a birth certificate to prove it. What she does have, however, are loyal followers who love to watch the YouTube diva dish out some delicious food and recipes on her channel.

In her video, Mastanamma is seen stuffing coconuts and covering them with naan to bake. She only utilises flavours from her very own kitchen – the open fields.

The 106-year-old cooks everything ranging from vegetables, lentils, fish, prawns and eggs as well as her famous watermelon chicken. Mastanamma puts a watermelon onto the fire and cooks inside the hollow melon using it as a utensil. She only cooks with firewood and natural fuels, and uses her eyes rather than cutlery to measure all the ingredients.

Up to five people are served the delicious looking food on banana leaves. However, for Mastanamma, cutlery is a big no and so is modern technology, hence, her YouTube channel is run by her great grandson and his friend.

When asked for advice to give to all her followers Mastanamma said, “Cook a lot of curries and eat well” as she chuckled.