Turkey brings back Ottoman sports to revive past glory

Turkey brings back Ottoman sports to revive past glory

Erdoga­n's govern­ment wants to develo­p tradit­ional sports to celebr­ate the glory days of Turkey's past
By AFP
Published: May 16, 2017
Tweet Email 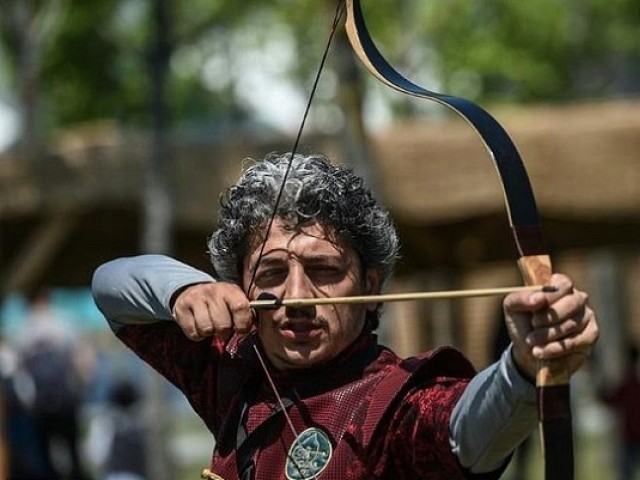 The Turkish government aims to celebrate the glory days of the Ottoman empire with the festival. PHOTO: AFP

ISTANBUL: Brandishing their javelins and letting out a bloodcurdling war cry, the Ottoman horsemen charge at a thunderous gallop. Suddenly one is hit and thrown from his horse – making dozens of children gasp as they film the scene on their smartphones.

It may be 2017, but Istanbul rolled back the years last weekend with the Ethnic Sports Cultural Festival [EKF], which aims to promote the sports practised by modern Turks’ ancestors – from the nomadic horsemen of Central Asia to the Janissaries, the elite troops of the Ottoman empire.

More than 800 athletes took part in traditional sports from Anatolia and Central Asia which President Recep Tayyip Erdogan’s government wants to develop to celebrate the glory days of Turkey’s past. The cavalry were taking part in ‘cirit’, a riding sport created in Central Asia in which riders throw wooden javelins at the opposing team’s horsemen. “This is the king of sports, it embodies the Turkish spirit,” said Erdem, 32, after dismounting.

The festival is part of Erdogan’s efforts to revive Turkey’s Ottoman roots after decades of Westernisation drive following the collapse of the empire. The modern Turkish republic was founded in 1923 after over 600 years of Ottoman rule.

“We want to revive our traditional values, beginning with our sports, in order to move forward with these values,” Bilal Erdogan, one of the president’s sons and an archery fan who is also EKF’s sponsor, told AFP.

A huge area on the European side of Istanbul usually used for political rallies was transformed into an Ottoman encampment for the four-day event. Wresters, archers and riders showed off their skills in between traditional cooking workshops, Central Asian dancing and carpet-weaving.

In front of a yurt, Adnan Balavan takes part in a “sword and shield game” consisting of simulating duels to produce a melody by rattling weapons. “I started at the age of eight. Today, I am 57 but my hair still stands on end like the first day,” said Balavan, originally from the northwestern province of Bursa, which was the first Ottoman capital. 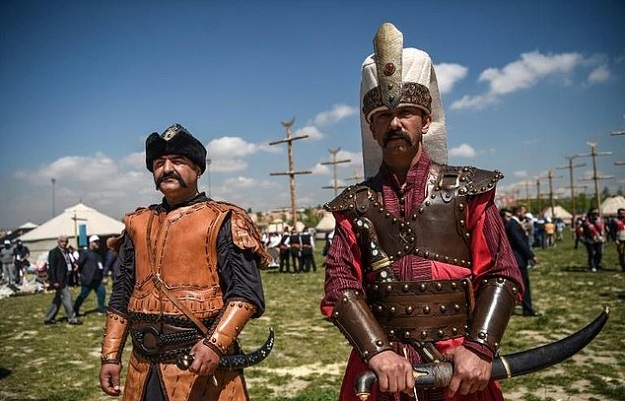 The Turkish government aims to celebrate the glory days of the Ottoman empire with the festival. PHOTO: AFP

Born of the wars that shaped Ottoman life and forged an empire that stretched from the Balkans to the Gulf, most of these traditional sports died when the old order fell after World War I. Their survival today is due in large part to families passing the traditions on from one generation to the next.

Traditional Turkish wrestling champion Sadi Bakir – bare-chested and covered in oil – said “interest in the sport has increased in recent times and the state is investing more effort in this field”. As a result, he said, “at the last European [wrestling] championships, we won five gold medals. The past power of the Turks is re-emerging.”

Yakup, a traditional archery instructor, also said interest in the discipline has exploded. “We have over 1,000 members” in his archery club, he said as he put arrows in a leather quiver. For the master archer, young people’s enthusiasm comes mainly from television series about the Ottoman sultans which have multiplied in the past few years.

Organisers said 800,000 people came to the festival, voicing hope that it would spark a passion for the sports in schoolchildren visiting with their classes. They even dream of one day organising a “Turkish Olympics” bringing together sportsmen and women from Central Asia, the Caucasus and the Balkans.

“Some people may not realise the importance of what we are doing here today, but we will reap the fruits one day,” Bilal Erdogan said during his opening speech. “And God willing, the 21st century will be ours.”