Imran Khan hits back at JUI-F chief for claimi­ng 'Jews' had offere­d him money to back PTI's agenda­
By News Desk
Published: May 14, 2017
Tweet Email 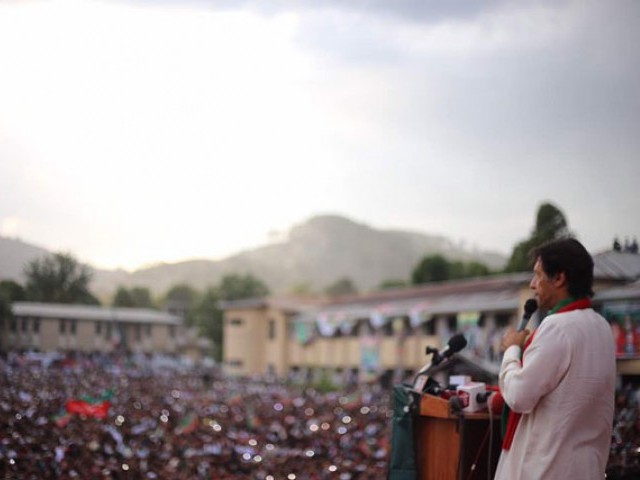 Pakistan Tehreek-e-Insaf Chairman Imran Khan speaks at a rally in Abbottabad on Sunday, May 14, 2017. PHOTO: PTI

Hitting back at Jamiat Ulema-e-Islam-Fazl (JUI-F) chief Maulana Fazlur Rehman over his claim that “Jews” had offered him money to back the Pakistan Tehreek-e-Insaf’s (PTI) agenda, PTI chief Imran Khan said on Sunday that they should have offered him diesel permits instead.

“I think the Jews made a mistake. They should have offered him [Maulana Fazlur Rehman] diesel permits,” Khan took a jibe at his rival politician while addressing a party rally in Abbottabad.

Lashing out at the Prime Minister Nawaz Sharif-led federal government, the PTI chief said the country could not progress until the incumbent rulers were sent to jail.

“Unless the rulers are put behind bars, there is no future for the people of Pakistan,” he maintained.

He added that corruption was the biggest hurdle in Pakistan’s development.

Will provide complete money trail for purchase of property in SC: Imran

“To bring Pakistan on the path of development and prosperity, it is necessary that corrupt rulers are held accountable for their misdeeds.”

Khan claimed that the prime minister was caught red-handed trying to fool the masses by saying that his financial interests were all backed by Qataris.

“The Qatari letter produced in the Panamagate case to support the Sharif family was fake,” he said. “The PML-N government had embezzled Rs62 billion from public funds.”

Claiming that Pakistan lost $10 billion to money laundering every year, Khan said the country did not face an external threat but one that existed inside it.

On the Panama Papers case, the PTI leader said the joint investigation team formed to probe into the matter would expose the illegally acquired wealth of the Sharif family. “The only truth Nawaz has told about himself is that nobody does corruption using their own name,” he added. “How can a prime minister eradicate corruption when he is involved in it himself?” he remarked.