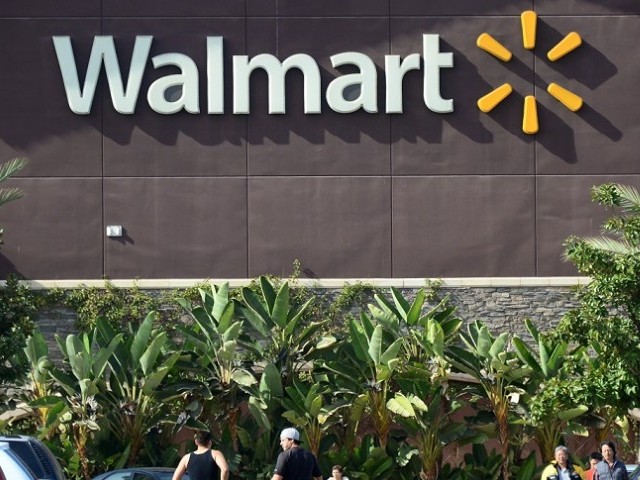 Wal-Mart is beefing up its online retail operations in response to Amazon and other competitors. PHOTO: AFP

NEW YORK: Wal-Mart Stores, the 800-pound gorilla of retail, is running hard to catch up in an increasingly crucial segment where it is neither the biggest nor the best: e-commerce.

The company, founded in 1962 by Sam Walton, has been gobbling up smaller and niche players in e-commerce in an effort to reach online shopping market leader Amazon.

Whether those efforts are paying off will be a focal point when Wal-Mart Stores reports quarterly earnings on Thursday.

A bit more than half of all funds spent online in the United States now goes to Amazon, according to the bank Macquarie.

Part of Amazon’s success stems from its breadth of offerings, which includes the Kindle that people use for reading and the Prime service that broadcasts popular television shows, said Krista Fabregas, e-commerce staff writer at FitSmallBusiness.com.

“It’s because Amazon has been doing such a great job at injecting itself into our everyday life,” she told AFP.

“Wal-Mart is not part of everyday life, nor is Macy’s, nor is Gap, nor the other stores. We don’t have a connection with any of them throughout the day.”

Wal-Mart has been doing some shopping of its own, in an effort to make up ground against Amazon.

It spent $3.3 billion last year to buy Jet.com, which was started by e-commerce entrepreneur Marc Lore, whose previous company was sold to Amazon for $550 million.

Lore is now chief executive of Walmart eCommerce US, where he oversees 15,000 employees split between Silicon Valley, Boston, Omaha and Bentonville, Arkansas, where Wal-Mart is based.

His annual salary at $237 million is 10 times that of Wal-Mart chief executive Doug McMillon.

In less than five months, Lore has directed Wal-Mart to a number of acquisitions, including Shoebuy.com ($70 million), ModCloth ($45 million) and MooseJaw ($51 million).

Wal-Mart is also in talks to acquire the menswear chain Bonobos for $300 million, according to a person close to the matter.

Part of Wal-Mart’s objective is to become a go-to place online for “essential” products, such as toilet paper, beauty products, groceries and holiday gifts and children’s toys.

“We are focusing on the type of products that customers buy most,” said Wal-Mart spokesman Ravi Jariwala. “We want to make sure that we have the best prices, shipping to your home or offering a pickup discount.”

Wal-Mart in February scrapped a subscription delivery program that was a rival to Amazon Prime in favor of a guarantee of free two-day shipping for orders of more than $35.

Under the program customers can also pick up orders below $35 for free if they go to one of Wal-Mart’s 4,700 US stores.

These efforts may cut into Amazon’s lead in e-commerce, but overtaking Amazon appears unlikely anytime soon.

“They have invested heavily on channels. It will restore growth that was necessary for survival,” said Keith Anderson of e-commerce analytics firm Profitero.

“I don’t see anything that suggests that Wal-Mart would catch up to Amazon or beat Amazon, but it’s still very early,” he said.

The vigor of Wal-Mart’s online investments today contrasts with its initial reticence in e-commerce, which was due to worries that growth of online shopping would cut into sales at brick-and-mortar stores.

Wal-Mart also was slow to introduce platforms for individual vendors who sought a venue for goods and did not introduce such an online marketplace until 2015, much after Amazon.

Hannah Donoghue, director of advisory at Planet Retail RNG, said it is still relatively early in the game as far as e-commerce.

Amazon is “the strongest right now, they are far ahead but there are a lot of innovations underway,” Donoghue said. “I don’t think Amazon will be the only one. There will be another strong player.”

For now, Wall Street is giving the edge to Amazon, valuing the technology giant at $453 million, compared with Wal-Mart’s $230 million.

That’s in spite of Wal-Mart’s far greater overall revenues, which were $485.9 billion in 2016, more than 11 times those of Amazon.

Manhunt for hackers behind global cyberattack