Cabinet sets 6% growth rate as target for next fiscal year

Cabinet sets 6% growth rate as target for next fiscal year 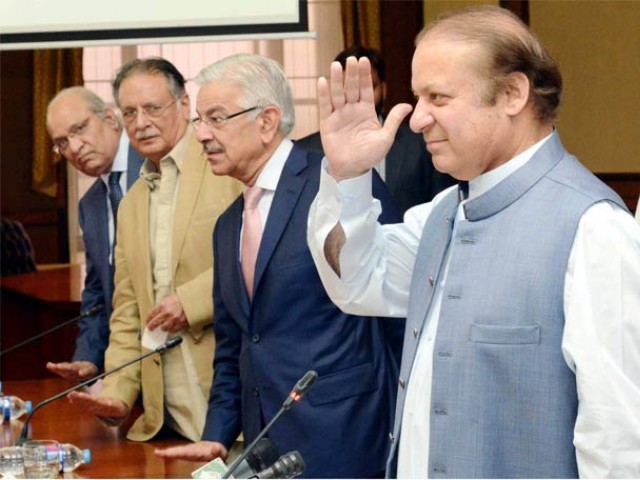 ISLAMABAD: The federal cabinet on Thursday approved budget strategy paper, setting a target of attaining 6% economic growth rate in the next fiscal year with an increase in development budget while seeking special package to attract foreign remittances that have started plunging after exports.

The 6% Gross Domestic Product (GDP) growth rate target for fiscal year 2017-18 is slightly higher than ongoing year’s anticipated growth but lower than the promise that the PML-N had made to deliver in its last year in power in the election manifesto.

Lowering growth rate target is the outcome of the government’s inability to end power outages that are shaving off growth every year and contributing to high unemployment.

The Finance Ministry also informed the federal cabinet that it would take new measures in the budget to curb ‘unnecessary’ imports that have adversely affected Pakistan’s external sector.

Among the measures are increase in rates of customs duties and the maximum slab rate may go up to 22%, which will make the goods expensive, according to the Finance Ministry officials.

However, increasing the maximum slab rate to 22% would be perceived as reversal of tariff reforms that the government has implemented under three-year $6.2 billion International Monetary Fund (IMF) programme. The sources said the government would expand the list of luxury items in addition to increasing duties on them.

Unlike previous occasions, this time the meeting of the federal cabinet was held in Prime Minister’s House and only about 16 federal ministers attended the meeting. The ministers of state, advisers and special assistants to PM were not invited.

For the next fiscal year, the Finance Ministry is aiming at around Rs4.8 trillion budget outlay, which is roughly 7% higher than ongoing year’s original size of the budget.

However, the final figures will have to work it again if the ministry fulfills Prime Minister Nawaz Sharif’s desire to increase the next year’s Public Sector Development Programme (PSDP) to over Rs1,000 billion.

For the next fiscal year, the Finance Ministry proposed Rs700 billion for core development budget and another Rs150 billion for other activities, taking the total figure to Rs850 billion.

The sources said the PM directed the Finance Minister Ishaq Dar that the size of the budget should be in ‘four digits’, which means over Rs1,000 billion allocation. The next year’s budget deficit target may by 3.9% of GDP or about Rs1.4 trillion, which is also not in line with the government’s original plan.

The federal fiscal deficit would be brought down to 4% of GDP by June 2020, according to the new definition of the Fiscal Responsibility and Debt Limitations Act, said Dar in the meeting.

For the budget year 2017-18, the government would aim to achieve 6% economic growth rate and enhance efforts to increase revenue generation, an official handout of ministry quoted Dar as saying. The target is lower than 7% that the government had promised to deliver in its last year in power.

This will be for the first time after more than two decades that the country will achieve 6% growth rate without any external aid or war related inflows, said Minister for Planning and Development Ahsan Iqbal. He said over 7% economic growth rate that Pakistan achieved in last decade was the result of foreign aid flows.

However, the cabinet was informed that the ongoing fiscal year’s 5.7% growth rate target cannot be achieved and the pace of increase in national output is expected to remain close to 5.4%, said the ministry officials.

The PM turned down a proposal from his cabinet minister to crack down against Hundi – an informal source of transfer of money. The sources said the prime minister instead desired that the Finance Ministry should give a package to attract foreign remittances, which have started decreasing.

According to Finance Ministry’s handout, the premier asked members of the cabinet to suggest measures which would discourage Hundi and other informal channels for money transfers leading thereby to increased foreign remittances through regular channels.

Commerce Minister Khurram Dastgir claimed that during the past two months the exports had picked up. In reality, the net increase in exports in April was only $89 million, which was 5% up from April last year due to low base effect.

The sources said the prime minister also directed that letters should be written to chief ministers to ensure that farmers get maximum benefits in shape of reduction in input cost and crops’ support price.

It was apprised that the PM’s agriculture package has yielded positive impact on the agriculture output as demonstrated by bumper crops of sugar-cane, wheat and maize.