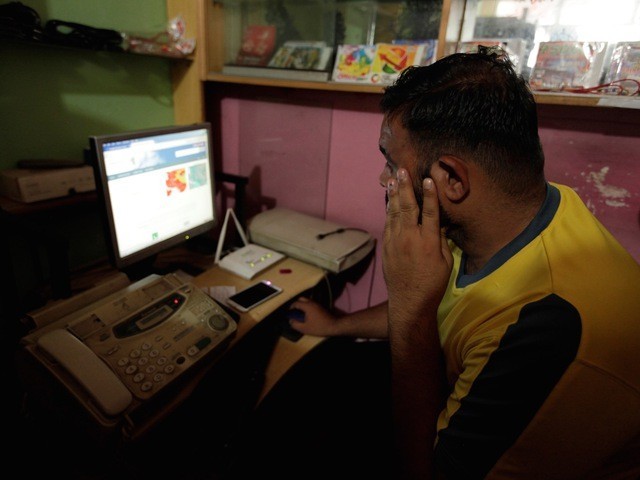 A man explores social media on a computer at an internet club in Islamabad, Pakistan, August 11, 2016. PHOTO: REUTERS

ISLAMABAD: Lawmakers on Tuesday called for implementing the blasphemy law and were of the view that the cyber-crime legislation should be amended to empower the Federal Investigation Agency (FIA) to take action against those found guilty of spreading sacrilegious content on the internet.

The suggestions were made by the MNAs during a meeting of the National Assembly’s Standing Committee on Information Technology and Telecommunication. The panel, chaired by PML-N’s Captain (retd) Muhammad Safdar, was taking updates from the Pakistan Telecommunication Authority (PTA) and FIA about the blasphemous content found on the internet.

During the meeting Ministry of Information Technology’s director of legal affairs informed the lawmakers that they had received over 3,000 emails from the general public about blasphemous websites.

He also said that the PTA had searched, identified and blocked 12,968 websites till April 2017, adding, “No complaint was lodged against any of the closed website.”

Regarding the help extended to law enforcement agencies, the PTA official mentioned that they had received around 1,000 requests in 2016 and had resolved around 70 per cent of those complaints.

He also added that the PTA will discuss the issue with the Facebook management as well when they visit the country in May or June of this year.

Pakistan Peoples Party’s MNA Shazia Marri, during the meeting, said, “The space is shrinking in society while putting coexistence in the country in danger.” She cited the case of Mashal Khan who lost his life due to social media and the hate which was being propagated under his name.

Marri also said that before there is any move to amend the law, citizens should comply with the existing law. She added that anyone who falsely accuses any citizen of blasphemy should be punished. “It is a matter of implementation not an absence of such laws,” she emphasised.

Marri said, “We need to stop abuse [of this law] and ensure its proper implementation,” adding that religious minorities should also be protected under the law.

Meanwhile, Muttahida Qaumi Movement’s Syed Ali Raza Abidi asked how confident are the authorities that amending the law will curb the blasphemous content as the Constitution already has article 295-C and laws related to blasphemy are listed in the Pakistan Penal Code.

The chair of the committee also added, “There should not be any compromise on the blasphemy related to Prophet Muhammad [PBUH], as it was obligatory upon every Muslim to respect and honour him.”

Meanwhile, FIA’s Deputy Director Noman Ashraf Bodla informed the members that the agency could only undertake legal action against the accused as per the law.

Hub on the boil

He said the managers of pages such as ‘Bhensa and Mochi’ and along with two others were arrested from Islamabad and were in a judicial lockup.

When Marri asked about their qualifications she was informed that one of the accused was a Master’s degree holder, another was an undergraduate.

Bodla also requested the committee for an in-camera briefing due to the sensitivities attached to the subject.

Later, the committee also decided to discuss the issue in detail and propose an amendment to the cyber-crime bill to empower the FIA to take stern action against the blasphemous content on the internet.