Hundreds of trees chopped for metro bus in Islamabad

Hundreds of trees chopped for metro bus in Islamabad 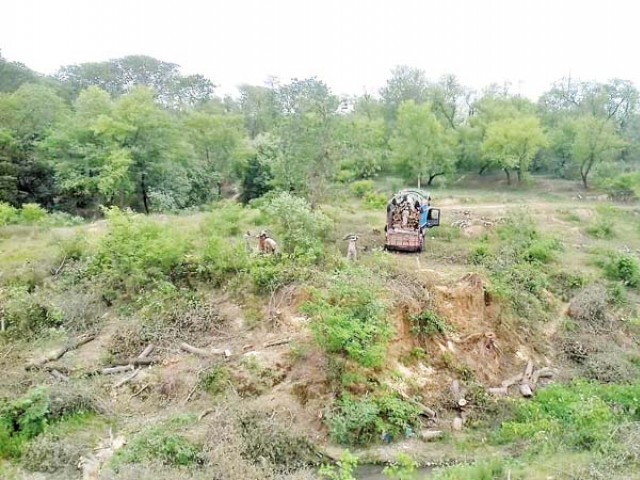 ISLAMABAD: As Prime Minister Nawaz Sharif broke ground on the Peshawar Morr-New Islamabad International Airport section of the Metro Bus on Saturday, nearby work continued on removing obstacles in the path of this progress: dozens of trees.

According to an Environmental Impact Assessment (EIA) study of the MBS project conducted by the National Engineering Services Pakistan (NESPAK), around a thousand trees of up to 110 years are set to become prey to the Metro Bus Service (MBS) which is being extended from Peshawar Morr to connect the city to the New International Airport (NIIA).

The trees which stand to be affected by the project include Shisham, Sirris, Phulahi, Kikar, Sukh Chain, Jacaranda, Fiddlewood, Amaltas, Mulberry, Paper Mulberry, Eucalyptus and Citrus. Moreover, there are a number of shrubs and herbs such as Lantana, Phog, Bhekar, Malla, Sanatha, Pataki and Arind.

Moreover, scores of fauna species including mammals, amphibians and reptiles lying along the MBS route are also expected to be affected by this development.

The project would see the bus move at either along the road, over or under it at various points through underpasses and bridges. The project would have 10 stations – connected through pedestrian bridges – which would be equipped with platforms, screen doors, escalators, turnstiles for automatic fare collection and other standard amenities for passengers. In addition to these stations, the plan has left space for adding four stations along its route in the future.

According to the EIA report, the construction of the MBS and its planned route are considered to be the best option for providing safe, efficient and reliable public transport with the lowest cost and have the least environmental impact in the long run.

Despite that, the project would see over 960 trees between the ages of five to 110 years being uprooted. Further, faunal species including mammals, amphibians and reptiles would be affected.

The report says that the total environmental impact of the project would cost the state – and hence taxpayers – Rs10 million.

These costs, included in the project concept (PC-I), would pay for environmental monitoring and miscellaneous items. The cost of replanting trees removed for the project has been worked out to around Rs11.87million.

Due to the extensive urbanisation, most of the wild animals in the area have largely migrated to the surrounding Margalla Hills. However, some wildlife such as wild boars, jackals, foxes, mongoose, rats, Indian hares and porcupines still inhabit the densely wooded green belts along the Kashmir and Islamabad Highways – right in the path of the project.

Moreover, reptiles including the spine-tailed lizard, fringed toed lizard, Indian Monitor and amphibians such as the common frog and common toad while birds including house sparrow and house crow will be affected.

Moreover, the report underlines that the use of heavy machinery during the construction of the project would cause air and noise pollution apart from generating solid waste. It would also generate municipal wastewater from construction activities, accidental leaks, spills of hazardous chemicals, health safety issues of workers, contamination of water bodies, removal of vegetation besides relocation of public utilities.

The EIA report notes that public movement and daily routine activities of locals visiting educational facilities including NUST, FAST, International Islamic University and Al-Huda educational institute would also be affected. Further, the construction, excavation and vibrations caused by work on the project may affect the stability of nearby buildings.