The nation's highes­t court is more likely to hear a case if the federa­l appeal­s courts reach opposi­te ruling­s
By Reuters
Published: May 6, 2017
Tweet Email 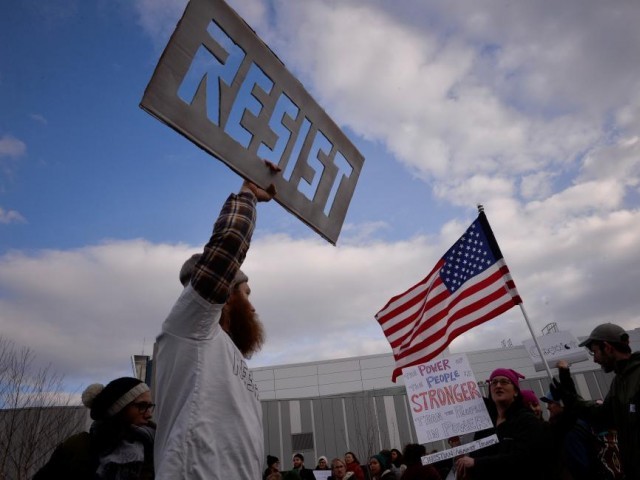 NEW YORK/SAN FRANCISCO: Legal challenges to President Donald Trump’s temporary travel ban on people from some Muslim-majority countries heat up again next week when two US appeals courts consider whether it is constitutional.

The legal fights may end up at the US Supreme Court perhaps in the fall, many months after Trump first issued an executive order in January saying there was an urgent need to halt some immigration to the United States for 90 days while officials reviewed the visa process.

Trump dropped the original travel order after unfavourable legal rulings and replaced it with a more limited ban which is itself now being challenged in appeals courts on two coasts.

Arguing that the United States needed to tighten national security measures, Trump’s attempt to limit travel was one of his first major acts in office. The fate of the ban is one indication of whether the Republican can carry out his promises to be tough on immigration and national security.

Omar Jadwat, an attorney at the American Civil Liberties Union, who will be arguing the case at the 4th US Circuit Court of Appeals in Virginia on Monday, said the fact that so much time has passed since the ban was issued is proof that there was no pressing national security need for it in the first place.

The court fight will give those challenging the order an opportunity to argue that the government never intended for the travel pause to be temporary, said Buzz Frahn, an attorney at Simpson Thacher & Bartlett in Palo Alto, California whose firm has been closely tracking the ongoing litigation.

Now almost 100 days after the original travel ban, the government says the period of 90 days was reset when the administration issued the new order in March.

The Department of Homeland Security “is, and will be, continuously examining ways to enhance the screening and vetting process to shut down terrorist and criminal pathways into the United States,” agency spokesman David Lapan said. “Some improvements will be classified, others will be public, but the Department has only just begun ways to enhance the security of our immigration system,” he said in an email.

Opponents – including states and civil rights groups – say that both the first ban and the revised ban, which also put a halt to all refugee admissions to the country for four months, discriminates against Muslims.

The government argues the text of the order does not mention any specific religion and is needed to protect the country against attacks.

The 4th Circuit will decide the fate of a ruling from a Maryland district judge that struck down a section of the revised executive order barring visitors from Syria, Iran, Libya, Sudan, Yemen and Somalia.

The hearing will take place before 14 full-time judges of the appellate court. Ten of them were appointed by Democrats, and four by Republicans.

Then, on March 15, a three-judge panel at the San Francisco-based 9th US Circuit Court of Appeals will review a decision from a Hawaii judge that halted not just the travel portion of the ban but also the section that barred refugees. The judges – who will sit on a panel in Seattle – have been assigned but their identities have not been made public.

The 9th Circuit blocked Trump’s first ban in February, in a unanimous vote by one Republican-appointed judge and two-Democratic appointees. Trump lashed out at the ruling on Twitter and said he is ready for a fight at the Supreme Court.

The nation’s highest court is more likely to hear a case if the federal appeals courts reach opposite rulings or if the issue is of great national importance, according to legal experts.

But the Supreme Court’s session ends in June, and if it takes the case it would probably not be heard until after the justices return in October.