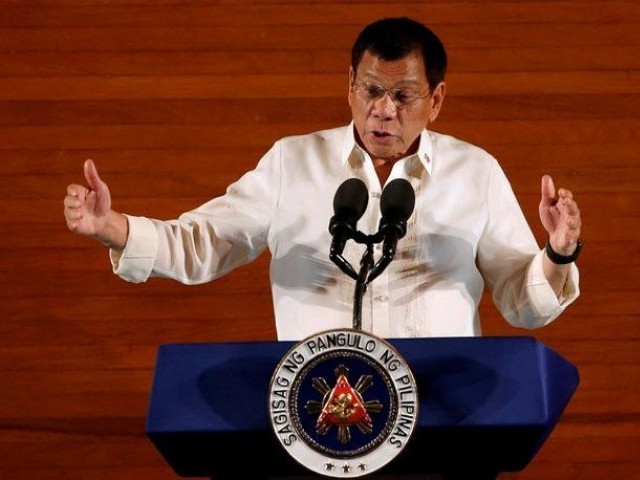 Duterte was due to release a chairman’s statement at the end of the one-day Association of Southeast Asian (ASEAN) leaders meeting that ignored an international tribunal ruling rejecting China’s sweeping claims to the strategically vital waterway. Ahead of the summit Duterte said the Philippines and other nations were helpless to stop Chinese artificial island building in areas they claimed, so there was no point discussing it at diplomatic events such as Saturday’s summit.

“It cannot be an issue anymore. It (Chinese presence) is already there. What would be the purpose also of discussing it if you cannot do anything,” Duterte told reporters on Thursday. But diplomats said other ASEAN nations, unhappy with intense Chinese lobbying of the Philippines, had sought to toughen up the chairman’s statement and there were hot debates on the issue leading up to Saturday’s summit.

“It can’t be seen that ASEAN has totally given in to Chinese pressure,” a Southeast Asian diplomat in Manila for the event told AFP.

China has been turning reefs and shoals in areas of the sea claimed by the Philippines and other nations into artificial islands, and installing military facilities there. The United States has criticised the construction work, warning against militarisation in the waterway where $5 trillion in annual trade passes.

ASEAN members Vietnam, Malaysia and Brunei also claim parts of the sea, but China insists it has sovereign rights over nearly all of it.
The Philippines, under previous president Benigno Aquino, had lobbied hard at ASEAN summits for the bloc to voice its strong opposition to the Chinese expansionism, and official statements at those events often reflected that. Aquino also filed a case at a UN-backed tribunal asking it to reject China’s claims and artificial island building.

The tribunal last year ruled largely in the Philippines’ favour. But the ruling came after Duterte took power. Duterte steadfastly refused to use the verdict to pressure China, instead pursuing warmer relations and billions of dollars’ worth of trade and aid. Duterte’s chairman’s statement, which is meant to reflect the views of all ASEAN leaders, will voice concern but not mention the ruling nor China directly, according to excerpts of the latest draft on Saturday obtained by AFP. China, through its ambassador to Manila, had this week been heavily lobbying Duterte to weaken it further, delegates and diplomats told AFP.

“The lobbying is quite intense. They (China) want it further watered down,” one diplomat told AFP. China had wanted ASEAN to remove a reference to “respect for legal and diplomatic processes”, and it was taken out of the South China Sea section of the latest draft of the chairman’s statement. Filipino diplomats said the phrase was important because “legal and diplomatic processes” encompassed the entire process of the filing of the case in the tribunal until its resolution.

Nevertheless, the new draft statement reintroduced a call for no further “land reclamation and militarisation” of the sea.
Diplomats said the reinclusion of the reference to land reclamation and militarisation meant that some ASEAN countries were not comfortable with “total acquiescence” to China. “This has to be reflected in the statement,” one diplomat, who did not want to be named, told AFP.

The chairman’s statement was due to be released on Saturday afternoon, after the ASEAN leaders finished their meetings and ahead of an informal dinner. The summit was also being closely watched for how Duterte, who has shocked with curse-laden tirades against the United States and other critics of his deadly drug war, handles hosting his first major diplomatic event.

Duterte’s drug war, which has claimed thousands of lives and led to warnings by rights groups about a possible crime against humanity, has been widely condemned in the West. But he has enjoyed support from some of his Southeast Asian guests this week, including Brunei Sultan Hassanal Bolkiah and Indonesian President Joko Widodo.