Decisi­on comes in line with reform recomm­endati­ons of the World Bank
By Our Correspondent
Published: April 27, 2017
Tweet Email

ISLAMABAD: The government has agreed to allow the private sector to market imported gas under the energy sector reforms in a bid to break monopoly of state-run gas utilities, a senior official in the Ministry of Petroleum and Natural Resources said.

According to the official, a high-level meeting was held in Islamabad on Wednesday, chaired by Minister of Petroleum and Natural Resources Shahid Khaqan Abbasi, where the participants agreed on the World Bank’s proposed plan.

The ministry has already been engaged in efforts to design reforms for the downstream gas sector with key stakeholders. The reforms entail a two-tier gas market, non-discriminatory access to gas networks (including third-party access) and restructuring of transmission and distribution systems along with a new tariff and subsidy methodology.

“The meeting was held to seek the input of stakeholders and discuss the detailed preparatory work on the reforms,” the official told The Express Tribune. 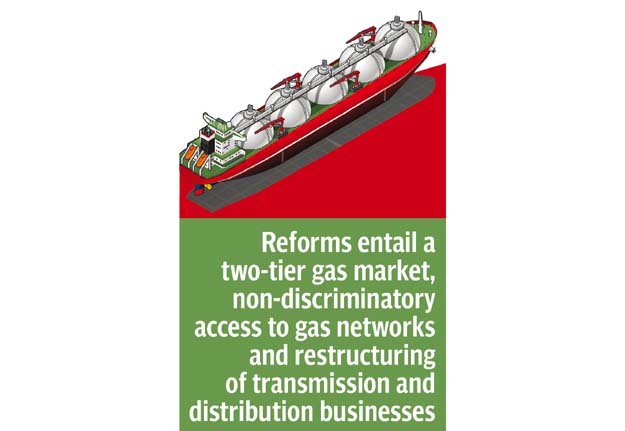 The official added that the government would give no subsidy to the LNG consumers under the two-tier formula, whereas domestic consumers using local gas would be given a cross-subsidy.

“The government has set the deadline of June 30 to split the existing two gas utilities,” he said. “Two gas utilities will be set up in each province and they will be tasked to bring efficiency in the distribution network in order to reduce gas theft and losses. A separate transmission system will also be set up.”

The operational and accounting “unbundling” of the transmission and distribution businesses in both gas companies – Sui Northern Gas Pipelines Limited and Sui Southern Gas Company – has been made effective since January 1. During the meeting, Abbasi said the government had formulated a plan for the import of four billion cubic feet of gas per day over the next five years.

“The government does not want to do business, rather it wants to play the role of facilitator,” he said. “We are committed to encouraging the private sector to conduct gas business over the long run.”

Pakistan to set up $1b infrastructure bank