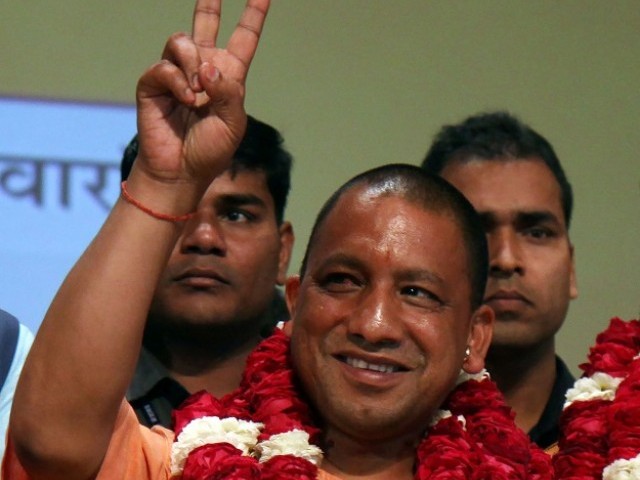 In this photograph taken on March 18, 2017, new Chief Minister of the northern Indian state of Uttar Pradesh Yogi Adityanath gestures to supporters as he is presented with a floral bouquet during a ceremony in Lucknow. PHOTO: AFP

The cabinet justified the cancellation by saying that instead of the holidays, pupils in schools will now be taught about these personalities and their lives, Times of India reported.

“The cabinet has cancelled 15 public holidays marking the anniversaries of great personalities. Students will now be taught on these days about these figures through various programmes,” cabinet minister Shrikant Sharma was quoted as saying.

Uttar Pradesh CM Adityanath had earlier expressed his concerns over reduced working days in schools because of a large number of public holidays.

“There should be no holidays in schools on the birth anniversaries of great personalities. Instead, a special two-hour programme should be held to teach students about them. The 220-day academic session has been reduced to only 120 days due to such holidays and if this tradition continues, there will be no day left for teaching in schools,” the chief minister said.

The UP government had 42 holidays out of which 17 are given on death or birth anniversaries of various prominent figures.

The revised list of all the holidays will be made available soon, said a government statement.