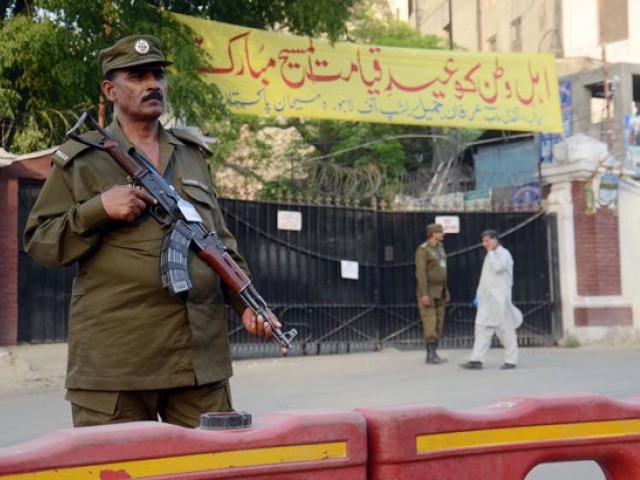 Security was beefed up on Sunday at churches across the country for Easter.

“There will be an optional holiday on April 17 (Monday), a day after Easter observed by the Christian community,” Radio Pakistan quoted the Interior Ministry as saying.

Meanwhile, Punjab Chief Minister Shahbaz Sharif felicitated the community on the occasion. “We share the Christian community’s joys today,” he said in a message from Lahore. “Easter is the name of spending time with deserving people and sharing joys by thinking above ourselves.”

The Punjab CM said the Christian community was playing its due role for Pakistan’s progress. “Believing in all prophets including Hazrat Esa (AS) is the mandatory part of Islam,” he said, adding brotherhood, unity and forgiveness are the main teachings of Prophet Jesus.

On Saturday, Pope Francis, leading the world’s Roman Catholics into Easter, urged them not to ignore the plight of immigrants, the poor and other vulnerable people. In his homily at an Easter Vigil Mass in St Peter’s Basilica, Francis recounted the Biblical account of Jesus Christ’s mother Mary and Mary Magdalene, filled with grief, as they went to visit his tomb following the crucifixion.

Francis has used the period leading up to Easter to stress his vision of service to the neediest. On Good Friday, he lamented that many people had become inured to daily scenes of bombed cities and drowning migrants. During Saturday’s service, he baptized 11 people, most of them adult converts to Catholicism, from Italy, Spain, the Czech Republic, the United States, Albania, Malta, Malaysia and China.

On Easter Sunday, the most important day in the Christian liturgical calendar, he will read his twice-annual “Urbi et Orbi” (“To the City and the World”) message in St Peter’s Square. Security has been tight for all of the pope’s Holy Week activities following recent truck attacks against pedestrians in London and Stockholm.