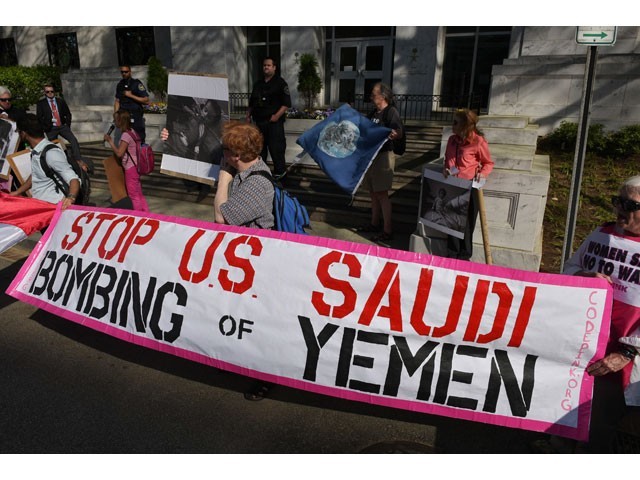 Activists take part in a rally outside of the Embassy of Saudi Arabia to protest against its action in Yemen on April 12, 2017 in Washington, DC. PHOTO: AFP

DUBAI: A court in Yemen’s Houthi-controlled capital Sanaa has sentenced a veteran reporter to death for spying for the group’s main enemy Saudi Arabia, Houthi media and a journalists’ association have reported.

Yahya Abdulraqeeb Al-Jubaihi was accused of establishing contacts with the Saudi embassy in Sanaa and sending it reports that endangered Yemen on the military, economic and political levels, the Houthi-controlled Saba news agency reported.

The decision by the State Security court in the capital Sanaa was reported on late Wednesday by the Houthi-controlled Saba news agency and by the Yemen Journalists’ Syndicate (YJS), a body that represents journalists.

Civilians ‘likely’ killed in US raid in Yemen: Pentagon

“YJS strongly condemns this unconstitutional and extralegal sentence that … brought Yemen back to a totalitarian and despotic era, and caused terror and fear among journalists,” the organisation said in a statement sent to Reuters.

Yemen is ranked 170th out of 180 countries in the 2016 Reporters Without Borders press freedom index. The group called on Wednesday for the release of 10 other journalists held by the Houthis for almost two years.

Saudi Arabia and its Gulf Arab allies have carried out thousands of bombing raids in Yemen since March 2015 in a campaign to try to restore the ousted government of President Abd-Rabbu Mansour Hadi.

The Houthis, close to Saudi Arabia’s arch-enemy Iran, have progressively lost territory to the offensive but maintain control over the capital and most population centres.