Chicago’s Henhouse Prowlers are loving it in Karachi

Chicago’s Henhouse Prowlers are loving it in Karachi

Four-member Americ­an band talks about what brough­t them to Pakist­an and how they see the countr­y
By Saadia Qamar
Published: April 13, 2017
Tweet Email 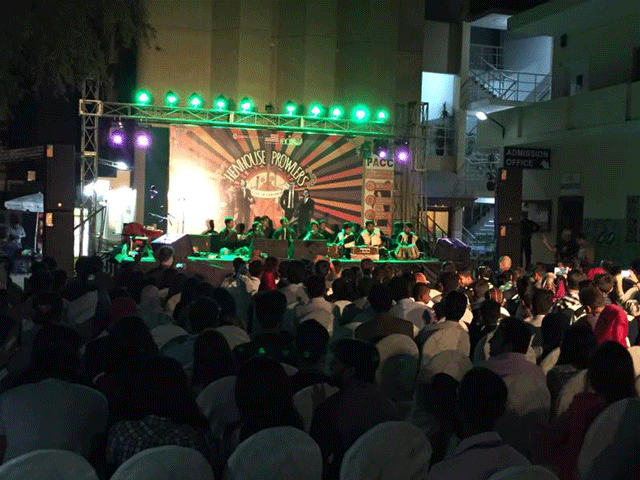 Currently, the Henhouse Prowlers are on a World Tour 2017, which kicked off with their first stop in Europe. They moved to Russia next and lastly Pakistan. PHOTO: COURTESY AMERICAN CONSULATE

KARACHI: Chicago’s eminent bluegrass band, Henhouse Prowlers, is in town. The four-member American band shares with The Express Tribune their views on Karachi and what brought them to Pakistan.

At the Pakistan American Cultural Centre on Wednesday, the band discussed music, fun times in Karachi, food, laughter and so much more.

The band comprises Ben Wright, a founding member, and Banjo player Jon Goldfine, who is on the bass, Aaron Dorfman, who is on the guitars, and the very shy Kyle O’Brien, the Mandolin player.

What really brought them to Pakistan? “It was a cultural exchange programme. The idea was to mix with the artistes in Pakistan, exchange ideas on music and make music,” Jon says.

Shedding light on what genre of music they are into, Ben says they play ‘traditional kind of American music’ that first started off in the 1940s. “It’s more like country music,” he says. “[It is] focused on vocal harmony, song writing and acoustic instruments!”

When asked if they have had a chance to listen to Pakistani music, Aaron says that they did but not that much. “But it’s here [that] I have had had my very first contact with Qawwali [and] with Hamza Akram Qawwal,” he shares. “I have never checked it out in the United States but I have experienced some Indian music [earlier].”

Talking about their perception of Pakistan, Kyle says that the news on Karachi is mostly scary. “News does get scary,” he says. “But experiencing it here first-hand is different. When you meet people your age, here in this city, you realise it wasn’t all that bad being raised in Pakistan. Also, there are similarities.”

When asked to reflect on one such similarity, Kyle says, “They are very familiar [with] the American culture and TV shows. Here I see they like to dance and act, too. What’s it like to express oneself, they surely know.”

What about Karachi, the city? “We are coming in from Chicago, to Karachi,” Ben says. “Chicago is not that big a city as Karachi is but we were prepared to come here! We think Karachi is an incredible place to live [in].”

According to Aaron, trips like these are pleasant surprises. “It is an incredible opportunity to see what Karachi is like.”

Currently, the band is on a World Tour 2017, which kicked off with their first stop in Europe. They moved to Russia next and lastly Pakistan. The tour started on March 7, says Jon. Kyle adds it will end on April 19 when they will land in their hometown of Chicago.

The school that is no more