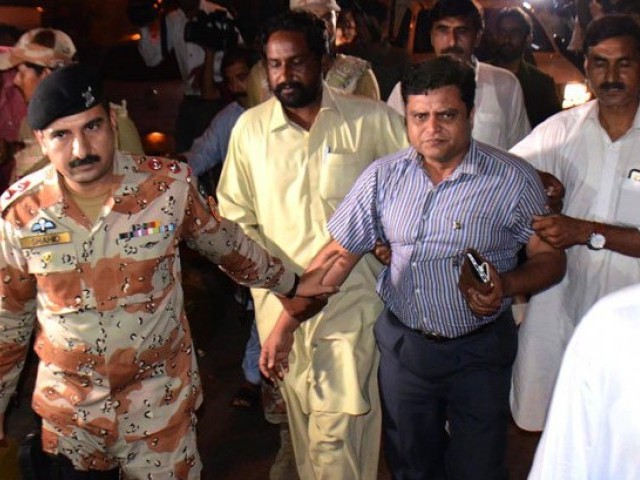 KARACHI: The MQM-London leader Amjadullah Khan on Wednesday announced to leave the party due to his “differences with the leadership regarding the party’s policy towards the country”.

Addressing a press conference at the Karachi Press Club (KPC), Khan said his sentiments were hurt when the MQM founder Altaf Hussain raised slogans against the country and sought help from Indian Prime Minister Narendra Modi.

“I had already made up my mind to leave the MQM before October 22 when I was taken into custody by the Rangers from the same place, but I had never got the opportunity to express himself,” he said.

He said during his incarceration he realized that he would not be able to serve the nation from the MQM-London platform and, therefore, he decided to quit the party.

Khan said he would continue to serve the people through different means. When asked if he was leaving the faction under duress, he replied in negative and said that he was not under anybody’s pressure.

Dr Zafar Arif, two others detained for 30 days under MPO

He said political workers landed into the prisons due to the wrong policies of their party and their brainwashing. “They [political prisoners] need rehabilitation,” he said.

Khan said he was sure that some of the people in the MQM-London were making propagandas in a bid to defame the country’s security institutions on the whims of someone else.

He denounced all statements of the MQM founder against the security establishment and the country and said he did not see anyone seeking help from the Indian PM as leader of Mohajir community.

Interestingly, Khan was one of those who came to the forefront in defence of Altaf after his own party disavowed him for his controversial August 22 speech. In October last year, he was arrested from the KPC along with Prof Hasan Zafar Arif.

Initially, both of them were detained under the Maintenance of the Public Order. However, later police booked them in a case pertaining to facilitating sedition and instigation violence. He was recently released from the jail after an anti-terrorism court approved his bail.