While adjudi­cating refere­nce, one judge of LHC had filed dissen­ting note
By Our Correspondent
Published: April 12, 2017
Tweet Email 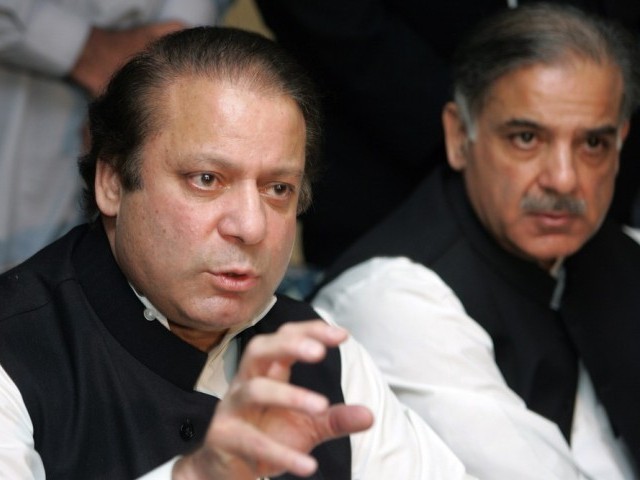 ISLAMABAD: Records of National Accountability Bureau (NAB) in Hudaibiya Papers Mills case against the Sharif family show that NAB Chairman Qamar Zaman Chaudhary had been told by the bureau’s then Prosecutor General Accountability (PGA) that the case was not fit for an appeal because the only thing the bureau could ask the apex court for was re-investigation.

“A reinvestigation would be perceived as witch hunting, victimisation which would only bring a bad name to NAB and damage its credibility,” revealed sources.

Dar’s confession in Hudaibiya scam case can be used against PM: SC

According to sources, the NAB chief while deciding not to file an appeal against Sharif family wrote that the prosecution was unanimous in its opinion that, for various (fatal) illegalities committed during the course of the investigation, the quashment (of the case) was unexceptionable.

The bureau’s PGA in 2015 had told the chairman clearly that first, a division bench of the Lahore High Court (LHC) had quashed the reference unanimously. However, one judge had dissented on the issue of re-investigating the case and later the referee judge had decided that the case cannot be re-investigated after quashment of the reference.

The PGA then wrote that on account of quashment of reference all the three judges of LHC were unanimous while only one supported re-investigation of the case. This, the PGA said, made a case for an appeal but ‘before the chairman makes his decision whether to file an appeal or not he should consider what chances of success NAB would have in the case even if NAB was successful in appealing and were allowed to re-investigate e.g. the fact that the case was approximately 15-years-old, the elder Sharif had passed away, whether such re-investigation would be a good use of NAB’s time and resources, whether a re-investigation would be perceived as witch hunting, victimisation which would only bring a bad name to NAB and damage its credibility.’

According to sources, NAB’s Additional Prosecutor General Accountability (APGA) Akbar Tarar had sent the file to the then PGA on May 27, 2014, mentioning that the LHC had decided the matter on legal premise which has to ultimately prevail. He supported the opinion that NAB may not assail the LHC judgement before the SC.

Documents revealed that the APGA had written that on the return of the Sharif family to Pakistan, the case was revived for trial. However, Shamim Akhtar filed a writ petition before the LHC urging that all the proceedings, investigations and inquiries leading to the filing of the reference and the reference initiated by NAB against members of the Sharif family be declared as illegal, mala fide, without lawful authority and without jurisdiction and hence the reference be quashed.

On the same day, the LHC granted a stay against the proceedings of the reference. The case was decided by the division bench in favour of the Sharif family.

However, one of the Judges gave dissenting note and the matter was referred to a referee judge who in a March 11, 2014, order decided the case.

“I am of the considered opinion that both of my learned brothers have rightly quashed instant reference,” the referee judge noted.

“However, an observation made by one of my learned brothers Imtiaz Ahmad, whereby, it was held that “However, it is clarified that the NAB authorities are competent to proceed against the petitioners if the investigation is again initiated in accordance with law”, is hereby set aside and I agree with the opinion and observations of my learned brother Farrukh Irfan Khan, wherein it was held by his lordship that, “As a sequel of the above discussion and reasons detailed above, I am of the considered view that after quashing the impugned reference, the afore-stated clarification, observation would not only amount to give a premium to the prosecution of their own fault but also provide them another opportunity ostensibly to fill up their lacunas and equip them with better tools for combating, victimising the petitioners at the hands of the NAB authorities which obviously is not the intent and purport of the law. For these reasons, in my humble view the stated observation, clarification is superfluous and uncalled for. It is observed that this petition is not to be referred again to the aforesaid teamed Bench which originally heard the same as the decision would not be that of majority, rather, it would be the opinion of this Court (Referee Judge) which would have decisive effect and would be of binding nature and the judgment will follow such opinion,” the referee judge quoted.

According to sources, Tarar had further written that the ADPGA (KPK/IHC) who was appearing in the case had given his opinion in the matter which may be perused.

“He [ADPGA] has opined that keeping in view the legal issues decided by the High Court, NAB should not file an appeal. However, on facts and evidence of the reference, NAB should file an appeal because on facts NAB has a strong case. I have also reviewed the case.

In my opinion, the learned High Court has decided the matter on legal premise which has to be ultimately prevailed. Thus I support the first option of ADPGA’s opinion reproduced above that NAB may not assail the impugned judgment before the Supreme Court,” Tarar concluded.

K.K. Agha, the then NAB prosecutor general and now a judge of the Sindh High Court, had stated that this is the Raiwind estate case which essentially concerns assets beyond known sources of income by certain members of the Sharif family including premier Nawaz Sharif.

“In essence, Nawaz bypassed the A/C and requested the LHC to quash the reference which had been filed against him. A two-member Bench of the LHC unanimously decided to quash the case however the two judges differed on the question of whether the matter could be reinvestigated by NAB after the matter had been quashed. This lead to the question of reinvestigation being referred to a Referee Judge to determine whether the matter could be re-investigated after quashment,” he further said.

“Although not asked, the Referee Judge held that the reference had rightly been quashed. He also held that no reinvestigation was possible after quashment.”

The PGA’s further said that the question was whether NAB appeals the decision of the LHC in the SC.

‘According to ADPGA (IHC), on legal issues, we should not appeal the case however on factual issues we have a strong case. The APGA has opined not to file an appeal. It would seem that with regard to quashment we have three Judges against us so our chances of success on appeal are limited in respect of quashment. With regard to the question of re-investigation, we have one judge in our favour. Prima facie in my view this ought to merit filing of an appeal. However, before the chairman makes his decision whether to file an appeal or not he should consider what chances of success NAB would have in the case even if NAB was successful on appeal and were allowed to reinvestigate, such as the fact that the case is approximately 15 years old, the elder Shariff is now deceased, whether such a re-investigation would be a good use of NAB time and resources, whether a reinvestigation would be perceived as witch hunting/victimization which would only bring a bad name to NAB and damage its credibility.’

Upon the prosecution’s input, the NAB chairman decided not to file an appeal in the case.

“The prosecution is unanimous in its opinion that, for various (fatal) illegalities committed during the course of investigation, the quashment is unexceptionable. As regards the possibility of reinvestigation, I agree with the PGA, that it would be an exercise in futility as this being such an old case, operationally it would be impossible to gather any worthwhile information. I, therefore endorse the opinion of the prosecution that this is not a fit case for an appeal,” the NAB chief wrote.