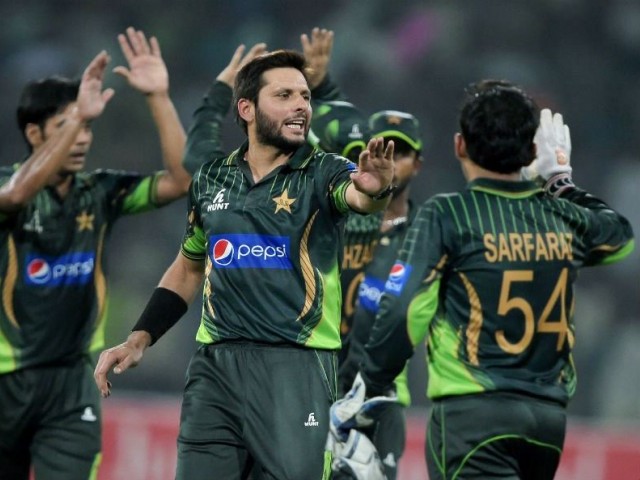 SETTING FOCUS: Afridi wants to help eradicate the problems of people of Pakistan who belong to small communities by using the platform of his foundation. PHOTO: AFP

Former Pakistan star all-rounder Shahid Afridi believes Pakistan are rebuilding a team of youngsters and the ODI and T20I captain Sarfraz Ahmed needs to find players who fit in his plans.

Afridi was interviewed by International Cricket Council (ICC) where he said that Pakistan needs to put in a lot of hard work while moving forwards in all formats.

“We need a lot of hard work going forward,” said Afridi. “No doubt, Sarfraz is an aggressive captain and the team needs such an individual. My best wishes are with him and I hope he finds the right combination as soon as possible so that he can build his team and gain confidence.”

Afridi, famously known as ‘Boom Boom’ for his ballistic batting style, while talking about his career said that the biggest achievement was to represent the Pakistan team. “Playing for Pakistan has been a big achievement for me. It can’t get bigger than that,” he said.

“My performances were up and down but you can expect that in a 20-21 year career,” he said. “Cricket makes you cry more than it makes you laugh. We laughed, cried, enjoyed ourselves and a great deal, even became emotional and we were aggressive at times as well. So we have been through many phases. I never thought of playing for so many years and I would like to thank the Almighty for this.”

Afridi then said that he couldn’t achieve everything he aimed for but he did manage to fulfil a few dreams. “I did have dreams and goals and I managed to achieve some of them. I consider myself lucky and I got plenty of satisfaction by being involved in the game and it’s like a dream come true.”

Lala (big brother) as Afridi is called by his teammates thinks every day is a new one to achieve something great so he hasn’t planned anything special except that he wants to do some good for the society using Shahid Afridi Foundation’s (SAF) platform.

“For me, every day is a new and beautiful day and I don’t have any future plans as such. However, as my cricketing phase is over now, I feel that it’s very important that I concentrate on my foundation’s work and also carry on playing league cricket for my fans,” said Afridi.

And why Afridi’s primary focus is SAF? “My country has a lot of problems and there are many people who have prayed for my success, day and night,” he explains. “I want to give back to society by doing social work for the people from small communities and my plan is to continue doing this for a long time.”

Pakistan's Boom Boom @SAfridiOfficial talks to ICC Cricket 360, reflecting on his career and what's in the future for him after retirement. pic.twitter.com/z46u8HPtE1