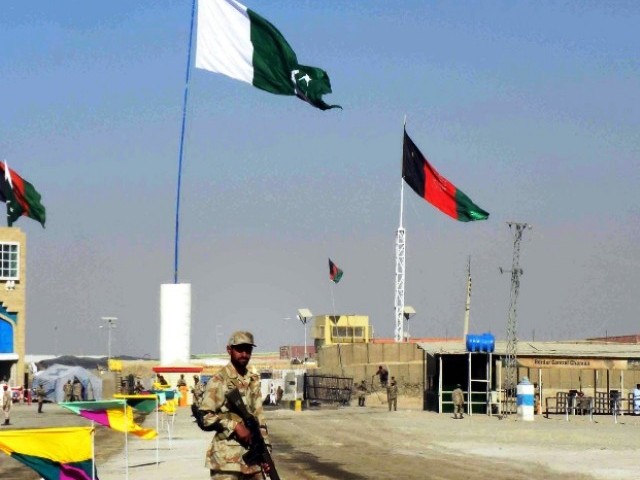 PESHAWAR: As ‘kinetic operation’ Zarb-e-Azb has paved way for Radd-ul-Fasaad – a targeted anti-terror operation across the country – Pakistan’s new security paradigm now revolves on fencing of the Pak-Afghan border and intelligence based operations (IBOs) against emerging terror threats, including Da’ish.

“There have been 36 cross border [militant] attacks [from Afghanistan] so far this year as compared to 85 attacks that took place during the same period last year.

“However, the movement of terrorists across the [western] border remains a major issue to tackle,” said a senior security official while talking to a select group of journalists in Peshawar on Friday.

“The roots of the problem [of terrorism] are across the border [in Afghanistan],” he added.

The official said 100-kilometer patch on the Durand Line will be fenced this year in the first phase.

“Sixty-seven (67) border posts will be completed this year but the idea is to fence the entire border which is not possible in one go,” he said.

He said 473 border forts will be set up across the entire Pak-Afghan border with elaborate surveillance system that will consist of Unattended Ground Surveillance System (UGS) and Man-portable Surveillance and Target Acquisition Radar (MSTAR).

The border management system that has been implemented in Torkham since May 1, 2016 will now be extended to Ghulam Khan in North Waziristan, Kharlachi in Kurram and Angor Adda in South Waziristan.

“While the apparatus will be the same, the size of the building and its staffing will be in accordance to the traffic on these posts,” he said.

The official revealed that Pakistan dismantled four main sanctuaries of terrorists in Afghanistan’s Kunar and Nangarhar province. “These sanctuaries located in Manjoor Kali, Gardaq, Parchao and Rena served as main bases of outlawed Tehreek-e-Taliban and its splinter group – Jamatul Ahrar. Lalpura, which served as the extortion base of the militants, has also been completely flattened,” he said.

The official acknowledged presence of ultraorthodox terror outfit Islamic State (IS) – also known by its Arabic acronym Da’ish – in Khyber-Pakhtunkhwa and Federally Administered Tribal Areas (Fata). However, he claimed that the militant group’s network in Peshawar had been completely dismantled.

This was the first occasion when key security officials have accepted presence of the proscribed organisation in the K-P and Fata.

“Twenty four (24) members of Da’ish who were involved in several coordinated attacks on government and security officials have been apprehended while their ‘Peshawar network’ has been dismantled,” said another senior official present at the interaction.

“Da’ish is a reality [in Pakistan]. The group has tried to make several attempts in establishing its footprints [in the country] but security and intelligence officials have worked hard to dismantle the current network in Peshawar,” he added.

According to the official, Dai’sh’s Peshawar chapter was involved in killing of a Fata Secretariat employee in June of 2016, targeted killing of 3 soldiers on September 18, 2016, targeted attack on a vehicle of the Frontier Corps on 22 November.

“The threat of any major attacks by Da’ish has been averted in Peshawar,” the officials said.

He said on March 21, five terrorists were killed in an IBO in Orakzai Agency. These included a high profile target Shah Dauran, a commander of the IS.

“They had planned to target Shia community during Nauroz festivals in two different areas,” he said.

He, however, said Da’ish militants did not have established hideouts in Pakistan, adding that their bases were in Afghanistan. “The Da’ish terrorists killed in Orakzai had crossed the border two days ago and were pinpointed with the help of locals,” he said.

The official said the IBO carried out in Malakabad, Swabi in the first week of March was also a great success. “There was confirmed information that the five terrorists killed in the raid were planning to target a judicial complex and GIK institute of Engineering Sciences and Technology,” he said.

Sharing stats he said 2,233 IBOs were carried out in the last three months. “Among these 1,234 were conducted in Fata while the rest in the K-P. A total of 2,517 suspects have been apprehended.,” he said.

He said 18 families suspected of facilitating militants had been disbanded from Mohmand Agency after perpetrators of a suicide attack at a mosque and an attack on Mohmand Rifle’s headquarters were traced to Tehsil Safi of the area.

“They were receiving instructions from the Shaunkrai and Nolai Marakiz of the terrorists,” said the official. “Since the areas around Charsadda and Peshawar have been under threat from Mohmand and Bajaur agencies, 37 check-posts have been set up there,” he said.

Talking about Temporarily Displaced Persons (TDPs) , he said 91% of the TDPs had returned to their agencies, while 93% of the total areas under operation have been de-notified.

“The Fata reforms are fully supported [by the security establishment] and it is extremely important to see it happen in the light of the decision of the parliament,” he concluded.

Meanwhile, Interior Minister Chaudhry Nisar Ali Khan on Friday once again claimed that the government had succeeded in improving law and order situation in the country in comparison with the previous regime.

“Corruption scandals and incidents of terrorism had become norms during the last government, but now the situation has generally improved,” the interior minister while addressing a ceremony in Rawalpindi on Friday.

He said previously five to six terrorists’ attacks used to occur in the country on daily basis and nobody bothered to improve the state of affairs. “The government will continue its efforts till the complete elimination of this menace from the country,” he said.