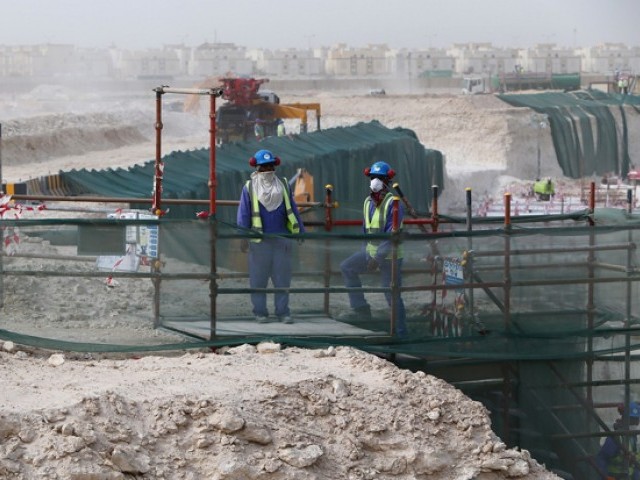 Foreign laborers work at the construction site of the al-Wakrah football stadium, one of the Qatar's 2022 World Cup stadiums. PHOTO: AFP

And half of the 10 contracting companies surveyed in the compliance report, published Wednesday, failed to give their employees even one day off per week.

In the most extreme example, some labourers worked 148 days in a row, equivalent to five months without a day off, the study by London-based Impactt, which calls itself an “ethical trade consultancy”, found.

Although the report was commissioned by the body organising the 2022 World Cup in Qatar, the Supreme Committee for Delivery and Legacy, its findings are likely to increase criticism of the Gulf emirate. “Impactt identified critical non-compliances at six of 10 contractors audited,” read the report.

The worst case Impactt found was the equivalent of some labourers working an 18-hour day, six days a week.

Under Qatari law, workers should complete a 48-hour week, equivalent to eight hours per day.

They can also work an extra two hours a day overtime and have at least one rest day per week.

Impactt’s report also identified the continual problem of migrant workers getting into debt by paying fees to work in the Gulf.

Almost 80 per cent of the 253 workers interviewed said they had paid recruitment fees to work in Qatar.

The report also found that at one contractor, 85 per cent of workers were scared to raise issues regarding their welfare for fear of being sacked.

Two workers at the same contractor were dismissed last October for apparently “inciting a strike”.

However, Impactt concluded there has been “overall progress” made by the Supreme Committee, with many contractors complying with new rules in workers welfare standards, which “went beyond Qatari law in some areas”.

Among its recommendations, Impactt said there should be greater compliance with the law by contractors, a stronger voice for workers and a strengthening of management skills.

Impactt said there was now 9,566 workers on World Cup projects working for almost 200 contractors or sub-contractors.

Qatar is spending almost $500 million every week on major infrastructure projects for the World Cup.

Also on Wednesday, the head of the Supreme Committee, Hassan al-Thawadi admitted to CNN in an interview that some in Qatar had not “applied the laws” on labourers’ working conditions, but insisted progress was being made.