The UAE, a key US ally, said it has commit­ted six F-16 and six Mirage fighte­rs to help enforc­e the no-fly zone.
By AFP
Published: March 25, 2011
Tweet Email 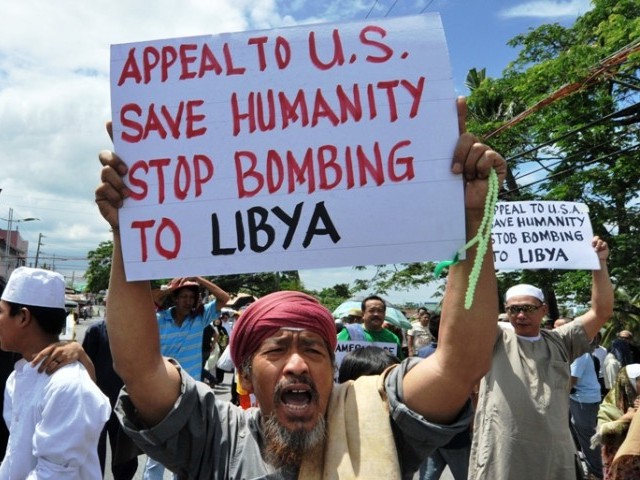 Philippine muslims displaying pro-Libya placards shout slogans during an anti-war protest after Friday prayers at a mosque in Manila on March 25, 2011. PHOTO: AFP

The United Arab Emirates, a key US ally, said it has committed six F-16 and six Mirage fighters to help enforce the no-fly zone over Libya, despite reservations linked to unrest in Bahrain.

“In support of UN Resolution 1973, the UAE is fully engaged with humanitarian operations in Libya,” he said.

“As an extension of those humanitarian operations, the UAE air force has committed six F-16 and six Mirage aircraft to participate in the patrols that will enforce the no-fly zone now established over Libya.”

A former UAE air force commander said earlier this week that his country had delayed its military deployment because of disagreements with the West over the unrest in Bahrain.

Major General Khaled al-Buainnain, quoted in Abu Dhabi’s The National newspaper, said the disagreement stemmed from the conviction of Arab states in the Gulf that Iran had stirred the troubles in Bahrain.

The Arab monarchies in the oil-rich region, traditional allies of Washington and the West, have been “supporting Bahrain, and they were not happy at all with the European and American attitude,” he told the English-language daily.

“They (the West) think it’s a matter of a civil movement, a matter of democracy,” he said. “What’s going on in Bahrain is much beyond our Western allies to understand it. It is a complete conspiracy of the Iranians.”

The general said the main reason for the UAE’s reluctance over Libya was “because the Europeans and Americans in particular don’t realise the amount of the threat available in Bahrain.”

He pointed to what he called Washington’s unsteady and shifting response to the fast-moving Arab revolts.

“Go and see the European, and especially the American attitude, toward Tunisia. How many positions in a few days?” Buainnain asked. “On Egypt, how many official statements in three, four weeks.”

A Shiite-led revolt against the Sunni royal family which has ruled Bahrain for more than two centuries has set off alarm bells in the oil-rich monarchies of the Gulf that have sent in a joint Gulf contingent.

Bahraini security forces last week demolished a demonstrators’ camp set up in central Manama’s Pearl Square, since when an uneasy calm has returned to the capital and its financial district.

Clashes between security forces and protesters since February 14 have killed at least 15 people, most of them demonstrators.

In Washington, a US official said on Thursday that his country was “deeply appreciative” of the contribution of its UAE ally to the international campaign in Libya.

With Arab states appearing slow to contribute, US Secretary of State Hillary Clinton said this week that Washington expected “more announcements” of Arab participation in the days ahead.

On Wednesday, five days after the United States, Britain and France launched air strikes to protect Libyans from Moamer Kadhafi’s security forces, Qatar was the only Arab state to have offered warplanes for the no-fly zone.

“NATO’s decision to assume command and control of the no-fly zone, in addition to the arms embargo already being enforced, is a significant step forward and will ensure that the alliance’s tried and tested machinery is used to best effect,” a Downing Street spokesman said.

He also welcomed the decision by the United Arab Emirates to contribute 12 planes to the no-fly zone, saying it was “evidence of the real and tangible Arab role, building on the leadership the Arab League as a whole showed when they originally led calls for a no-fly zone over Libya.”

The NATO and UAE decisions late Thursday “demonstrate the strength and breadth of the coalition involved in protecting the people of Libya”, he said.

“Britain welcomes both of these important developments. They reinforce international efforts to implement UNSCR (UN Security Council Resolution) 1973 and protect the people of Libya,” he said.

France’s Chief of Defence said Friday in a radio interview that he thought allied military operations in Libya would last a matter of “weeks” and hopefully not “months”.

“I doubt that it will be (over) in days, I think it will be weeks, and I hope it won’t be in months,” Admiral Edouard Guillaud told the France Info radio station.

“There will not be, strictly speaking, a situation of getting bogged down militarily because obviously the solution is political,” he said.

“Clearly, it is now a matter of finding political solutions, but that’s not my domain,” he added.