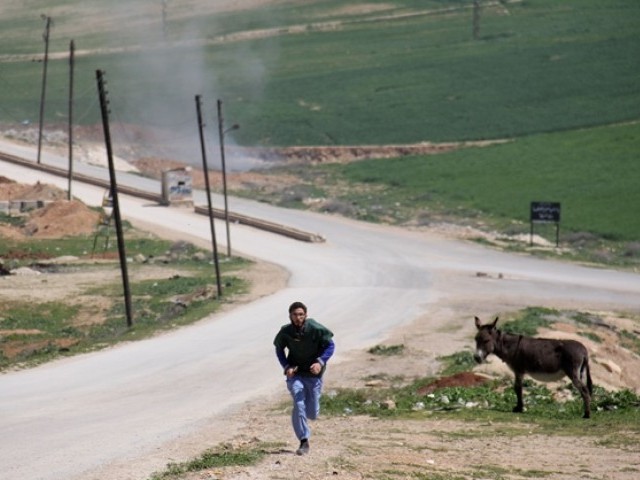 A Syrian medic runs for cover during the air strikes which hit a hospital in Khan Sheikhun, a rebel-held town in the northwestern Syrian Idlib province, on April 4, 2017. PHOTO: AFP

The strikes hit the building in Khan Sheikhun, bringing down rubble on top of medics as they struggled to deal with victims of an attack that reportedly killed dozens of people.

Warplanes first bombed near the hospital then could be heard circling back before hitting the facility twice, AFP’s correspondent reported.

A centre next door belonging to the White Helmets rescue organisation was also hit in the strikes, AFP’s correspondent said.

White Helmets member Khaled al-Khatib on his Twitter account said the centre had been hit with five strikes.

About 10 medics who had been treating victims for suffocation and other symptoms were able to flee.

The Syrian Observatory for Human Rights, a Britain-based monitoring group, said military aircraft hit near the hospital but could not confirm whether anyone was hurt or killed.

Medics there had been treating victims of a suspected chemical attack that killed 58 people, including 11 children, the monitor said.

Another 160 people were wounded, suffering respiratory problems and symptoms including vomiting, fainting and foaming at the mouth, the Observatory said.

The monitor said warplanes hit a residential part of Khan Sheikhun, a rebel-held town in the northwest province of Idlib, and released “toxic gas.”