No drama between me and Root, says Cook

No drama between me and Root, says Cook 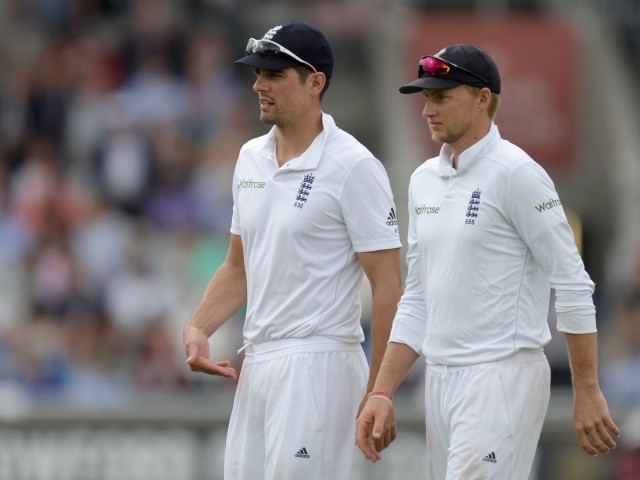 LONDON: Alastair Cook is confident his relationship with newly appointed Test captain Joe Root will be “absolutely fine” and the former England skipper has assured his successor he will get all the support he needs in the role.

Cook, who was appointed captain in 2012, led England in a record 59 Tests including Ashes victories at home in 2013 and 2015 as well as series wins in India and South Africa.

The 32-year-old stepped down in February after a 4-0 defeat in the five-Test series in India at the end of last year.

Getting more runs on board will help captaincy: Root

He was replaced by Root, who will captain England for the first time against South Africa at Lord’s on July 6.

“A lot will be made of it, there always is, it’s a good story to write about but I think it’ll be absolutely fine in terms of our relationship,” Cook told British media.

The former captain said he hoped his transition back to just playing for the team would be smooth.

“I feel like I can get back in the troops and get on with it and hopefully score some runs and help England win cricket games, which ultimately is what everyone wants to see,” he added.

ECB tell England players to be brave and smile

The left-handed opening batsman has scored more Test centuries than any of his predecessors and is also England’s most prolific run-getter with 11,057 runs in 140 Tests.

With the emergence of a pair of batting prospects in India for England’s fragile top order, Cook hoped he could continue making an impact with the willow.

Haseeb Hameed and Keaton Jennings became Cook’s 10th and 11th opening partners since the retirement of Andrew Strauss, with both youngsters showing signs they might have bright futures after impressive debuts in India.

“You’re always under pressure, that’s what life is about,” said Cook. “That is what playing international cricket or being a professional sportsman is. You’re there to score runs.

“If you don’t do that over a period of time, people will look elsewhere. That hasn’t changed and that’ll never change, whether it’s myself or Jimmy Anderson, you’ve got to play to a certain level to be picked for England or even Essex.”