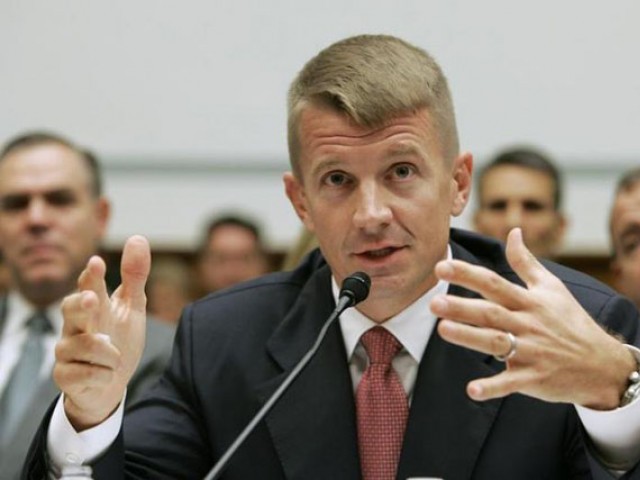 Blackwater founder, Erik Prince, is known to have close connections to the Trump administration despite not playing an official role. PHOTO: REUTERS

The United Arab Emirates arranged a secret meeting in January between Blackwater founder Erik Prince and an aide of Russian leader Vladimir Putin as part of an apparent effort to establish a back-channel line of communication between Moscow and Donald Trump, a report published by The Washington Post has claimed .

The meeting which was brokered by the UAE in Seychelles islands took place on January 11, mere days before US President Donald Trump’s inauguration.

Prince presented himself as a Trump administration representative and the meeting was held in hopes of encouraging Russia to curtail its relationship with Iran, including in Syria.

While the specifics of the meeting are unknown, officials speaking to The Washington Post said the overall goal was to initiate dialogue with the Russian government outside of traditional channels.

Prince reportedly approached Abu Dhabi crown prince Sheikh Mohamed bin Zayed al-Nahyan and asked him to arrange the meeting with the Russian. Zayed, who reportedly met Putin twice in 2016, would have the necessary connections to set up the private meeting.

However, an American businessman who knows Zayed, called him ‘cautious’ saying it would be out of character for him to arrange the meeting without agreement from top aides of Trump and Putin. “There had to be a nod,” he added.

Government officials in Seychelles said they were unaware of any meetings between Trump and Putin aides in the country.

However, the country is ideal for secret meetings between governments, because: “Seychelles is the kind of place where you can have a good time away from the eyes of the media. That’s even printed in our tourism marketing,” said Barry Faure, the Seychelles secretary of state for foreign affairs.

US officials told The Washington Post that the Seychelles meeting would be investigated as part of its investigation into Trump administration’s ties with Russia. However, Prince and the White House has denied the Blackwater founder met anyone on behalf of Trump’s administration.

“Erik had no role on the transition team. This is a complete fabrication,” a spokesperson for Prince said in a statement.

“The meeting had nothing to do with President Trump. Why is the so-called under-resourced intelligence community messing around with surveillance of American citizens when they should be hunting terrorists?”

“We are not aware of any meetings and Erik Prince had no role in the transition,” Sean Spicer, the White House press secretary said in a statement.

Prince is known to have close connections to the Trump administration despite not playing an official role. He was a prominent Trump supporter and donated $250,000 to the Trump election campaign. He also has close ties to Steve Bannon and is the brother of Education Secretary Betsy DeVos. He was also spotted multiple times in the Trump transition offices in December.

Prince’s security firm, Blackwater came under controversy after company’s guards were criminally convicted of killing civilians in Iraq in 2007. He sold the firm after that but with contracts in Middle East and Asia, he has continued building a private paramilitary empire.