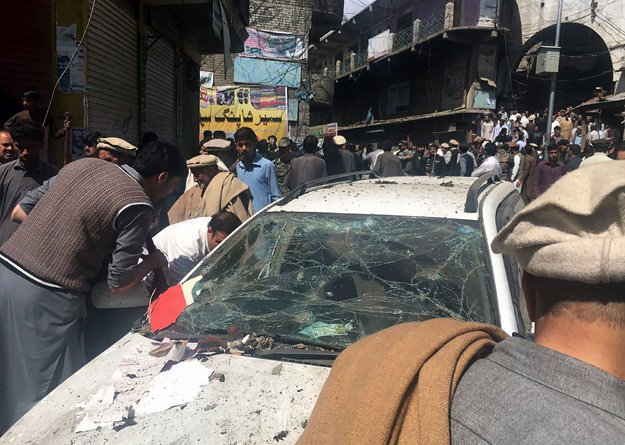 A car bomb tore through a market in Parachinar, officials said, in an attack claimed by the Taliban. PHOTO: AFP

MULTAN: People from different walks of life and the business community of southern Punjab condemned the bomb blast at an imambargah in Parachinar, Kurram Agency and expressed sorrow over the loss of lives in the tragic incident.

Multan Chamber of Commerce & Industry (MCCI) President Khawaja Jalaluddin Roomi said the business community stand with armed forces and the government till the elimination of terrorism. He prayed for eternal peace of the departed souls and courage to the bereaved families to bear the irreparable loss with patience.

“We will continue our struggle till the complete elimination of terrorism from the country,” Advocate Faheem Gill said while expressing sympathies with the bereaved families.

Azadari Association Multan President Asghar Naqvi said no religion allowed spreading terror and killing of innocent people even if they are nonbelievers. He said the whole nation was united to share the grief of affected families.