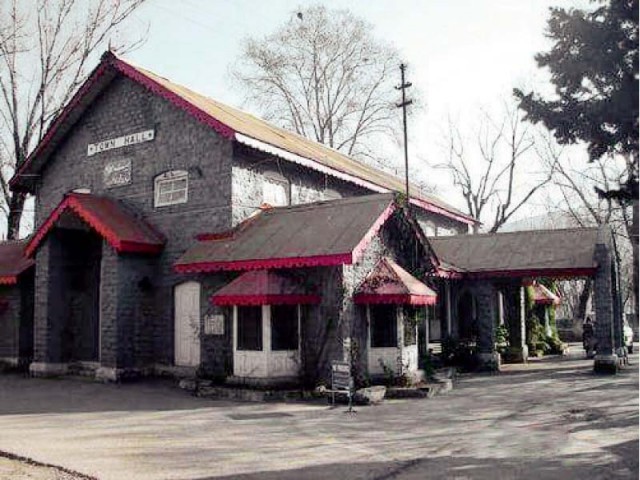 A view of Abbottabad Town Hall which houses the Abbott Museum. PHOTO: SADAQAT/EXPRESS

ABBOTTABAD: In a sudden move, the Tehsil Municipal Administration (TMA) of Abbottabad has sealed the historical building of the Abbott Museum, forcing its staff out, officials told The Express Tribune on Thursday.

However, there were conflicting claims from the TMA and the Hazara University (HU) – which had been managing the building since 2006 – on whether a court-ordered stay on the building against the TMA had been vacated or not.

No progress on establishment of national museum

According to Fawad Khan, in charge of the Abbottabad Town Hall building, the building was being used by HU’s Department of Archaeology since 2006.

The hall, built by Major James Abbott who had formed the town in 1853, houses the Abbott Museum and a number of historical artefacts from different eras.

It also houses a student facilitation centre which gives out admissions forms to students and other information about the HU’s admission and result system.

Fawad said that on Wednesday afternoon. TMA’s Taxation Officer Farasat Khan entered the museum accompanied by around 20 subordinates, and forced the university staff out of the building and locked the four offices and the main museum.

He said that the TMA staff made aware of the fact that a clear cut stay order had been issued and that the case was pending before an Abbottabad sessions judge for over a year.

However, this did not dissuade the TMA staff who continued with their operation.

Meanwhile, Dr Shakirullah Khan, head of the Archaeology Department at the Hazara University, confirmed that the TMA had sealed the building.

He added that the museum houses a number of highly prized archaeological items including coins dating back to the Indo-Greek, White Huns, and Kushan periods. Moreover, it also contains artefacts from the Gandhara civilisation and tribal customs of local tribes of Abbottabad.

Around a year ago, the TMA wanted HU to vacate the building. But the varsity challenged the move in court and obtained a stay order which had yet to be vacated by the court.

However, the TMA staff, in apparent contempt of the court’s directive, locking the building down.

However, Dr Shakirullah said that the TMA had opened two of the offices in the building on Thursday, probably fearing a backlash from students and higher authorities for the act.

“But we have filed contempt of court case against the tehsil nazim and the staff of TMA today and the parties were served notices for appearance on Saturday,” Dr Shakirullah said, adding that at the last hearing of the matter on Monday, the court had set April 6 as the next date for hearing further arguments.

Meanwhile, Tehsil Nazim Ishaq Sulemani said that his staff had locked the museum after the court vacated the stay order.

He added that the TMA wanted to utilise the building as a public library, which was more important than the museum.

He said that the office meant for students facilitation would remain functional despite changing the status of the town hall to a library.

The tehsil Nazim added that the TMA had been paying utility bills of the building from its accounts since 2006, not HU which had been occupying it.

Moreover, Sulemani said that they had formed a five-member committee of the tehsil council to negotiate with HU administration for an amicable resolution to the dispute.