Security guard graduates with distinction from college he worked at

Security guard graduates with distinction from college he worked at 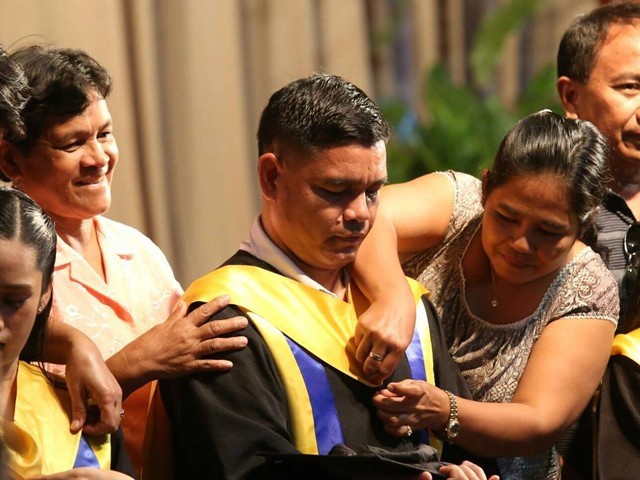 Saint Theresa's College security guard Erwin Macua graduates with a bachelor's degree in Elementary Education. He receives his hood from his mother and his cap from his wife Irenea during the graduation rites. PHOTO: FACEBOOK via CEBU DAILY NEWS

For 17 years, Ervin Macua was a security guard at St Theresa’s College in Cebu City, central Philippines. Over the weekend, he graduated with distinction from the same college.

The 38-year-old, juggling his nightly guard duty and full course loads every semester, graduated with a degree in General Education. Macua worked from 7:00pm to 7:00am and attended classes from 7:30am to 4:00pm.

With a wife and three kids, it was during sophomore year he thought of quitting, telling the SunStar he felt he lacked time for his family. But with support from his wife, Macua made the dean’s list every semester.

He managed to pay off the fee for his first year in college, and was sponsored by an anonymous donor for the next three years. Macua’s passion for teaching came from observing the diversity of students at the college. He plans to become a licensed teacher and will be taking his license exam for teachers in September.