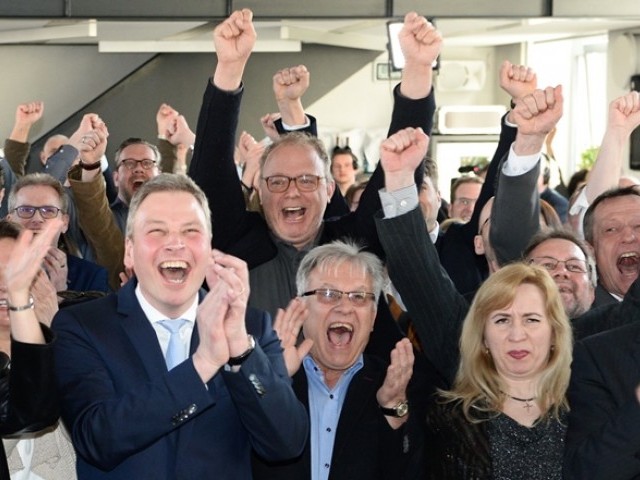 Supporters of the Christian Democratic Union (CDU) react after exit poll results of the state election in Saarland were announced on public TV at an election event in Saarbrucken, south-western Germany on March 26, 2017. PHOTO: AFP

In the Saarland state vote held six months before a general election, Merkel’s Christian Democrats (CDU) won 40 percent against 30 percent for the Social Democrats (SPD), according to early results by public broadcasters.

The result spelt a five-point boost for the CDU over the SPD, which has served as the unhappy junior partner to the conservatives in so-called grand coalitions at both the state and national levels.

The vote in the tiny state on the French border, which has a population of only one million, was seen as a bellwether ahead of the September 24 general election in which Merkel, the veteran leader often dubbed “the Queen of Europe”, will seek a fourth term.

The SPD have made strong gains in national opinion surveys since Martin Schulz, the folksy and plain-spoken former president of the European Parliament, took over in January.

The “Schulz effect” has seen especially younger voters flock to the more than 150-year-old workers’ party, which is now polling neck-and-neck at the national level with Merkel’s conservative bloc.

But the new euphoria did not translate into the strong results the SPD had hoped for in Saarland, a former coal mining region, which held the first of three German state polls scheduled in the run-up to the national election.

Schulz conceded it was “not a nice evening” and that “the CDU clearly won” but insisted that “our goal is a change of federal government” this year, calling the campaign until then “a marathon, not a sprint”.

The CDU’s popular state premier Annegret Kramp-Karrenbauer, who was cheered by jubilant supporters, admitted she was “floored” by the strong result, about five points up from the last election amid strong turnout of around 70 percent.

Merkel’s right-hand man Peter Altmaier, the chancellery chief-of-staff who hails from Saarland, said “it’s an outcome that gives us courage”.

The result suggested many voters in Saarland were frightened by talk of a “red-red” coalition between the SPD and the far-left Linke party, which scored about 13 percent.

Merkel, 62, had warned local voters last week that “red-red… experiments should be avoided” and urged them to stick with the CDU’s “path of success”.

She had also cautioned at a campaign event that a leftist coalition would harm the economy and “wall it in with taxes, bureaucracy and red tape”.

A starker warning came from the pro-business Free Democrats who cautioned against turning Saarland into a modern version of the former communist East Germany or “a GDR lite”.

The SPD’s Justice Minister Heiko Maas admitted the outcome was “disappointing” and conceded that “we had clearly hoped for a better result”.

He said the debate over a possible red-red coalition had “obviously penalised the SPD” by frightening part of the electorate.

Another leftist party — the ecologist Greens, possible candidates for a future “red-red-green” national coalition — meanwhile scored less than five percent, meaning they missed the hurdle for parliamentary representation and were kicked out of the state assembly.

CDU secretary general Peter Tauber said the outcome was “a clear rejection of red-red-green”, including at the national level.

“In uncertain times, the people trust in leaders and political forces that govern in a dependable way,” he said.

The anti-immigration and right-wing populist Alternative for Germany (AfD) party just scraped in with six percent, meaning it is now represented in 11 of Germany’s 16 state assemblies.

It was however the AfD’s worst result after five state elections in which it topped 10 percent, in a sign that the abating refugee crisis and bitter infighting have damaged popular support for the protest party.