Pilot for a day: Thalassemia patient gets her wish

Pilot for a day: Thalassemia patient gets her wish 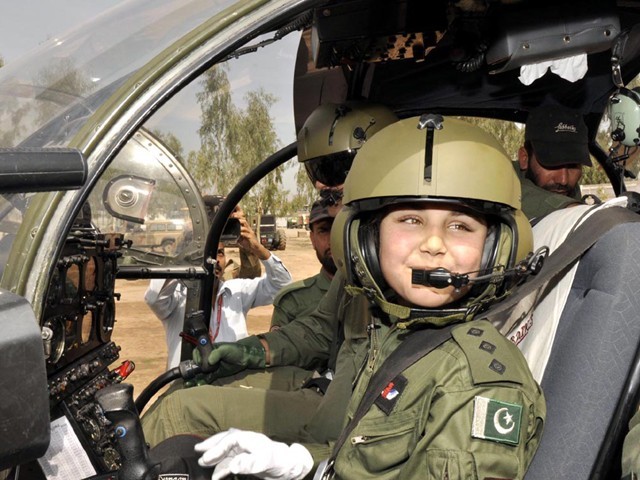 It was like a dream come true for 12-year old Naima Gul, resident of Mingora, Swat, when she became the first female pilot of the Pakistan Army Aviation.

PESHAWAR: It was like a dream come true for 12-year old Naima Gul, resident of Mingora, Swat, when she became the first female pilot of the Pakistan Army Aviation, after her wish was granted by Chief of Army Staff (COAS) General Ashfaq Pervez Kayani on Tuesday.

Naima, who is suffering from Thalassemia, wrote a letter to General Kayani informing him of her wish to become a pilot. She received a prompt reply and was inducted as the first aviation female pilot in the history of the Pakistan Army.

“I don’t know how long I will live, but today my dream has come true,” Naima said, speaking at her induction ceremony.

“I will live for my country and will die for it,” said Naima.

“I’m lucky to have received a prompt reply from the Chief of Army Staff, who not only fulfilled my dream but also gave me immense courage, to fight against this deadly disease,” she added.

“I want to help patients suffering from this disease through establishing Naima Gul Foundation,” she added. The foundation, she said, would provide free medication to patients of Thalassemia.

Speaking at the induction ceremony, Corps Commander Lt Gen Yasin Malik said the role of women is not only increasing generally in society but also in the army, where they are working alongside the men.

Naima’s father, Zabatullah Sohail, her mother, Shabana Anjum and her younger sister Roqia were also there to see Naima fly a Lama helicopter.

“I’m a proud man today, as my daughter got the honour of becoming the first female pilot in Pakistan Army, an army whose jawans have given matchless sacrifices to achieve peace for the people of Swat and the rest of Pakistan,” Zabatullah told APP.

Naima’s mother thanked the COAS, the Corps Commander Peshawar and other officials for fulfilling her daughter’s dream.

“We are proud parents,” she added.

With her enrolment as honorary aviation pilot for a day, Naima’s treatment and education would be free

“We are happy that the army would carry out all medication and education expenses of Naima,” her father said.