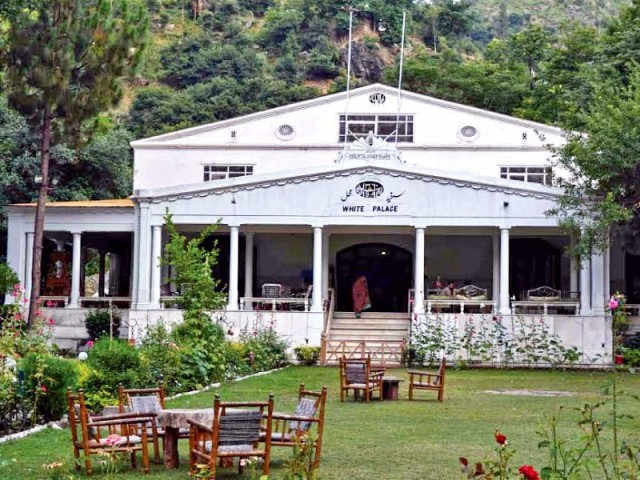 A view of the White Palace in Swat. PHOTO: EXPRESS

SWAT: Marghuzar Valley, which is just 12 kilometres away from Mingora, is a rich attraction for domestic as well as foreign tourists.

The valley is surrounded by snow-capped mountains, streams of azure water with a dense forest cover heavily populated by a wide variety of wildlife.

The area is perhaps best known among visitors for the majestic architecture of the ‘White Palace’ that adds to the valley’s splendour.

The palace was built in 1941 by Mian Gul Abdul Wadood, alias Bacha Sahib, the first Wali of Swat.

Bacha Sahib, who is credited for being the architect of modern Swat, ordered the palace to be built in 1930.

It took almost 11 years to build.

After its inauguration, Bacha Sahib convened a meeting of his state cabinet in summer of 1941.

According to Bacha Sahib’s grandson Mian Gul Sheharyar Amir Zeb, who is the current owner of the beautiful but ostentatious palace, the building was initially called Moti Mahal.

The building’s name, he said, was later altered and renamed the ‘White Palace’.

“Bacha Sahib was an innovator and he did not like an archaic and common name (Moti Mahal) for the palace … So he preferred to call the building White Palace, instead of Moti Mahal.”

Sheharyar Amir Zeb said that Bacha Sahib travelled far and wide and during a visit to “what is now Rajasthan, an Indian state, he saw a tile being crafted from white-coloured marble … Bacha Sahib later called on the then ruler of Rajasthan.”

Amir Zeb said that there he decided to import white marble from Jaipur, Rajasthan’s capital, for building the White Palace in Swat.

Zeb highlighted the role played by the ‘White Palace’ when Swat was a princely state, saying that because of the palace, the Marghuzar Valley earned the status of summer state capital of Swat, where Bacha Sahib and his successor, the Wali of Swat, Mian Gul Abdul Haq, used to convene meetings of state cabinets, secretaries and also met state guests.

After nominating Mian Abdul Haq Jahanzeb (Bacha Sahib’s elder son) as the state’s crown prince and even after the transfer of power to him in 1949, Bacha Sahib spent his life in the White Palace until his death in 1971.

“After the Swat state was merged with Pakistan in 1969 and Bacha Sahib’s death, the ‘White Palace’ lost its importance,” Zeb said.

Now, he said, the palace was being used as a hotel run by a private firm on lease.

Shoukat Sharar, a local architect, said that even after seven decades, the palace was still in pretty good shape.

The building, he said, had a massive drawing room, a dining hall and a meeting room.

According to him, the palace contained a special room where Bacha Sahib met with guests.

The palace also contained dozens of rooms, used by the cabinet members of the Swat state, secretaries and local chieftains during their stay.

He said that the flawless palace needed to be conserved in addition to preserve precious pine trees in the area surrounding the building.

“Trees are being indiscriminately cut illegally … This needs to stop immediately,” he said.