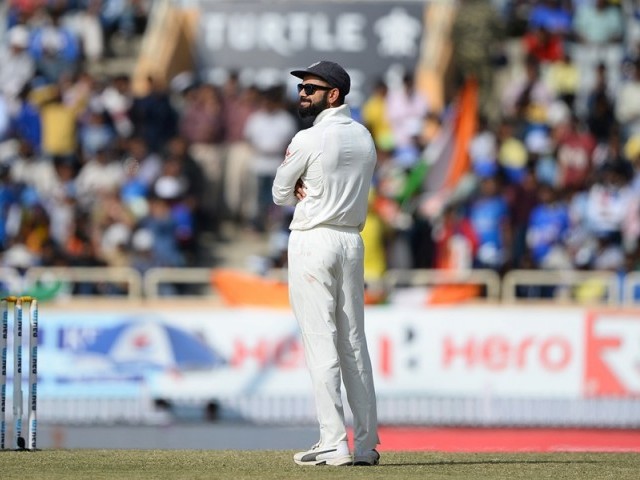 Indian team captain Virat Kohli watches the screen as a Decision Review System (DRS) call is made for Australian batsman Shaun Marsh during the fifth day of the third cricket Test match between India and Australia at the Jharkhand State Cricket Association (JSCA) Stadium complex in Ranchi on March 20, 2017. PHOTO: AFP

RANCHI: India captain Virat Kohli said his spinners could have been more effective in the drawn third Test against Australia but for the softness of the ball used in the contest.

Having reduced Australia to 63-4 in the final day’s morning session after taking a 152-run first inning lead, India looked in a great position to register their second successive victory in the four-Test series, but a wicketless afternoon session scuppered their hopes.

Peter Handscomb and Shaun Marsh collaborated for almost four hours to frustrate the hosts with a dour fifth wicket stand of 124 runs, and Kohli reckoned it could have been different had the balls used in the match retained their hardness.

“I think the hardness of the ball was a big factor,” said Kohli. “When the ball was new last night, it spun well off the rough. Even this morning, it was spinning well. But in the middle session, the ball was not hard, so could not generate that kind of pace from the wicket.”

After Kohli took the new ball, Ravindra Jadeja dismissed Marsh for 53, while spin partner Ravichandran Ashwin sent back Glenn Maxwell but Australia had reached safety by then.

“On day five, wicket slows down anyway. We took the new ball and got a couple of wickets. But the hardness of the ball in the middle session was a factor,” added Kohli.

His counterpart Steve Smith was rather amused when asked about his opinion. “I haven’t really thought about it. We both use the same ball, you just got to do what you can with it,” he said.

Kohli dismissed suggestion that he underbowled off-spinner Ashwin, who is currently the top ranked bowler in the five-day format, while persisting with Jadeja, who claimed nine wickets in the match.

“The fast bowlers were more effective from the far end and the spinners from the commentary end,” Kohli explained. “Whenever Jadeja came to bowl, he picked up a wicket or two every three-four overs. It was very difficult to change him at that stage because he was bowling in good momentum. That was one of the factors.”

Kohli said Jadeja’s second innings figures of 44-18-54-4 was the most economical he had seen and the left-arm spinner outperformed everyone on a pitch which did not offer much assistance to them.

“You can leave aside Jadeja, because he really stood apart among the bowlers. But I think generally, bowlers found it difficult to make things happen from the centre of the wicket,” he said.