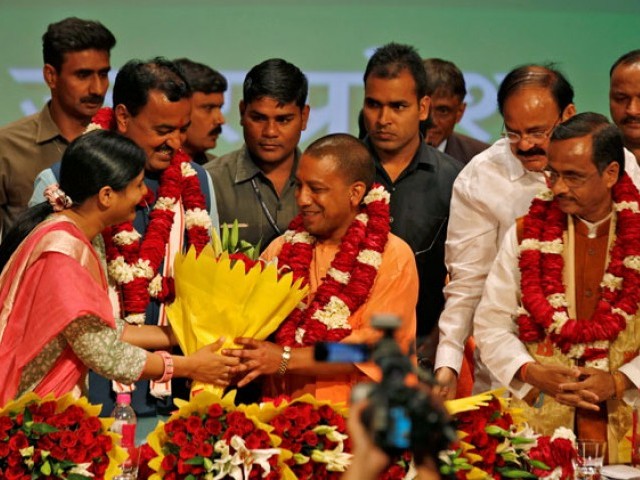 Yogi Adityanath (C) is greeted after he was elected as Chief Minister of India's most populous state of Uttar Pradesh, during the party lawmakers' meeting in Lucknow, India March 18, 2017. PHOTO: REUTERS

NEW DELHI: Indian Prime Minister Narendra Modi picked Hindu hardliner Yogi Adityanath, who has been accused of inciting violence against the country’s Muslim minority, to lead its most populous state after his party won a landslide victory last week.

But officials of Modi’s Bharatiya Janata Party said Adityanath, who will take charge on Sunday, was the appropriate leader for the state.

“This is a watershed moment in the history of BJP,” Venkaiah Naidu, Federal Information & Broadcasting Minister told reporters after BJP officials met in UP capital Lucknow on Saturday.  “The mandate is for development, good governance and against caste politics.”

The BJP won control of the state a week ago, earning the biggest majority there for any party since 1977, after the prime minister pitched himself as a man on the side of the poor.

The win has raised the prospect of Modi’s re-election in general elections in 2019. But Manish Tewari, senior leader at the Congress party, tweeted that Adityanath’s appointment was a “harbinger to greater polarisation.”

Yogi Adityanath means development is now subordinated to Majoritarianism of Samshan over Kabristan.Harbinger to greater Polorisation-2019

Adityanath, 44, is the head priest of the Gorakhnath Mutt, a Hindu temple in eastern UP, and a fifth-time lawmaker in the Indian parliament. He has supported strong laws for cow protection, and also said minority groups that oppose yoga should either leave the country or drown themselves in the sea.

He has also been accused of making inflammatory speeches during the campaign, where Modi’s party didn’t field a single Muslim candidate.

Professor Sudha Pai, an expert on UP politics at the Jawaharlal Nehru University, said Adityanath “is not a good choice and will not help Modi’s development agenda.”