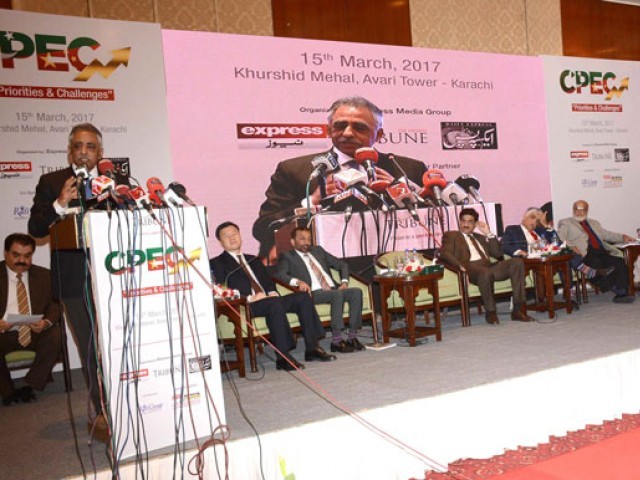 KARACHI: Sindh Chief Minister Syed Murad Ali Shah has said that he has the honour to be associated with the China-Pakistan Economic Corridor (CPEC) from its very beginning when it was conceived.

“Today, with the grace of God, I am part and parcel of the process under which it is implemented. Its largest portfolio is the energy sector which is bigger in terms of the allocation of funds,” the chief minister said while addressing a seminar on CPEC organised by The Express Media Group.

The chief minister said the foundation work of CPEC was laid by former president Asif Ali Zardari and Prime Minister Nawaz Sharif signed the MoU for the corridor in July 2013.

“Therefore, we say that the wisdom of our leadership, our hard-work and our close relationship with China founded by Shaheed Bhutto, and cemented by Shaheed Benazir Bhutto and Asif Zardari translated into CPEC,” he said.

Shah said: “China looks into the future and plans accordingly. They have worked a 1000-year plan and the plan is known as `One Belt, One Road’ through which they have connected more than 64 countries – physically, commercially, culturally and other links.

“CPEC is not simply a road from China to Gwadar, but it has a vast connectivity with other projects of One Belt, One Road,” he said and added that it would prove to be a game-changer in true letter and spirit.

Shah said the southern corridor begins from Guangzhou, city in South Central China. This route connects Kashghar with Pakistan at Khunjerab. The central corridor starts from Shanghai and connects with Tashkant, Tehran and onwards to Bandar Imam Khomeini on the Persian Gulf.

“One of its branch goes towards Europe up to France. The northern corridor starts from Tianjin and Beijing passes through Moscow and links it to Berlin and Rotterdam,” added Shah.

Shah also said that he attended the JCC meeting in December 2016 in China in which he successfully managed to include three important projects – the Karachi Circular railways of $2.609 billion, Keti Banadar Power Park, Transmission Line, Road, railway and jetty for $5,000 million and Dhabeji Exclusive Economic Zone for which feasibility is underway.

“These projects would change the face of Karachi, but of the entire Sindh in terms of transport facilities and power generation.”

“Sindh has also launched its Transmission and Dispatch Company, which would transmit power from Nooriabad to Karachi for K-Electric and we are going to inaugurate it shortly,” he announced.

MQM-P convener Dr Farooq Sattar added in a lighter vein that the country lacked census and consensus, but now we had consensus on CPEC and fortunately census was also being held in the country.

Sattar lauded the efforts of the Sindh chief minister and added that he had shown great interest in including Sindh in the CPEC project and every party should support him.

“It is a game-changer and the whole world is observing us,” he said and added: “It is our duty that we should protect this project and make it even more successful.”

Sattar also emphasised the need of connecting it with every person in the country, as “real beneficiary of the project should be the people of Pakistan and by this we can bring social and economic change in their lives”.

Chinese Consul General Wang Yu said through CPEC, China and Pakistan would bring back peace in the region.

“CPEC will ensure prosperity in the region and with this definitely peace will get a chance.”

Yu added that not only China and Pakistan, but other countries would also benefit from CPEC in the region.

Sindh Governor Mohammad Zubair, while addressing the seminar, said: “This is an era of interdependence. Therefore peace in Afghanistan is necessary for Pakistan’s economic prosperity, and similarly stability in Pakistan is vital for India’s long term economic growth.”

“CPEC is by far the most important project Pakistan has ever had,” said Zubair.

Up until 2013, Pakistan was not able to benefit from China’s economic rise, but the situation changed after that and the two countries decided to turn their excellent political relations into a strong economic partnership through CPEC, he added.

“Pakistan is not only depended on CPEC and its projects, it is also working on mega projects like Tajikistan-Afghanistan-Pakistan-India (TAPI) projects that will also usher in economic growth in the region,” he said.

The governor said mega infrastructure projects had already attracted foreign Information Technology (IT) companies to Pakistan because they were getting huge projects in the country.

He said the on-going dialogue on CPEC’s western and eastern routes was a not negative and added “it is a healthy activity that promotes dialogue in the country”.

“Do not hesitate, do not panic,” stressed Zubair on the CPEC’s different routes.

Sindh Engro Coal Mining Company CEO Shamsuddin A Shaikh said the Thar Coal projects were running ahead of time and the company was expected to complete the first project by June 2019.

“We will be able to reduce electricity cost considerably once we are able to increase coal production to [a] certain level.

“We will be able to produce electricity at 6 cents per units once we reach our production capacity of 4,000MW,” he informed the seminar.

Karachi Chamber of Commerce and Industry (KCCI) President Shamim Ahmed Firpo commented that due to the improvement in the security situation, more foreigners were now coming to Pakistan.

“CPEC is already helping Pakistan because it has improved the image of the country in the world as a safe destination for investment,” he added.

Just a few years ago, five-star hotels in Pakistan were not able to attract customers even at Rs4,000 per day, he said.

“Now you do not get rooms even in Rs20,000 per day partly because of the influx of foreigners in the country.”

Firpo said: “CPEC is a huge project of national importance; therefore, all political parties should stand behind it and make it a successful venture for both economic and social development of Pakistan.”