Russia hopes to rope in Taliban for Afghan talks

Russia hopes to rope in Taliban for Afghan talks

US and EU offici­als would also be invite­d to the next meetin­g of the 6-nation consul­tation­s
By Tahir Khan
Published: March 14, 2017
Tweet Email 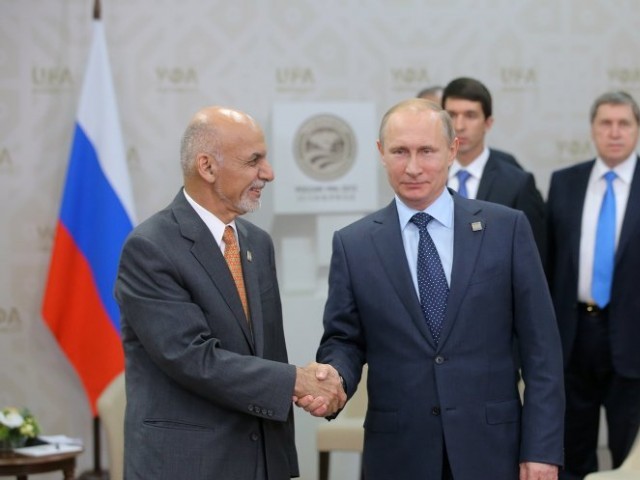 ISLAMABAD: Russia wants the Taliban’s political representatives to join the dialogue initiated by China, Pakistan and Russia and expanded last month when Afghanistan, India and Iran joined the process.

Sources told The Express Tribune that Russia had indicated last month during a meeting in Moscow that at “some stage it would also make efforts to get the Taliban to attend the meeting”.

Afghanistan, however, disagreed with the proposal. This could be seen as a setback for reviving the political process, at least for now.

“While others (participants) had no comments on this proposal, the representative of the Afghan government expressed reservation in this regard,” sources privy to the meeting said.

Diplomatic sources say that Russia will convene the next meeting on April 14. Kabul had angrily reacted to the first trilateral sitting held in Moscow in December last year.

The Taliban’s political representatives in Qatar declined to comment about this development.

A Taliban source earlier confided to The Express Tribune that Russia and China would be acceptable as guarantors if and when peace negotiations begin.

Sources said that the US and EU officials would also be invited to the next meeting of the 6-nation consultations.

Afghan officials said they were suspicious about Russia’s actual intentions to invite the Taliban to the next meeting because they did not want anyone else to take the initiative.

“Russia is trying to legitimise the Taliban and if Taliban representatives take part in that meeting it would mean that they are equal to the legitimate government in Kabul,” an Afghan official said.

Kabul is increasingly frustrated by Russia’s growing contacts with the Taliban in recent months.

Zamir Kabulov, who is President Vladimir Putin’s special envoy to Afghanistan, however, insists that “peace must be between the Taliban and the Afghan government.”

“For this (purpose), we should be asked in accordance with international law and principles of foreign policy [of the] Russian Federation. Both sides should ask us: ‘Please arrange such a conference, we want to make peace under your auspices.’ We haven’t gotten such a request yet,” Kabulov told Turkey’s Anadolu Agency in late December.

Kabulov, considered to be the man behind Moscow’s strong connections with Taliban, had met several times with the Taliban political envoys in Qatar.

The Taliban in their latest statement said they considered a political solution to be the best solution to the Afghan conundrum.

“The establishment of the political office … conveys to the Afghan people and the world that the (Taliban are) not … fighting for the sake of fighting. The (Taliban) leadership … has appointed some … experienced diplomats … in its political office,” the Taliban statement said.

The statement said the political office had been set up in Doha (Qatar) because Taliban wanted a peaceful solution to the Afghan issue and did not want their detractors to claim otherwise.

Pakistan to extend support to Yemen