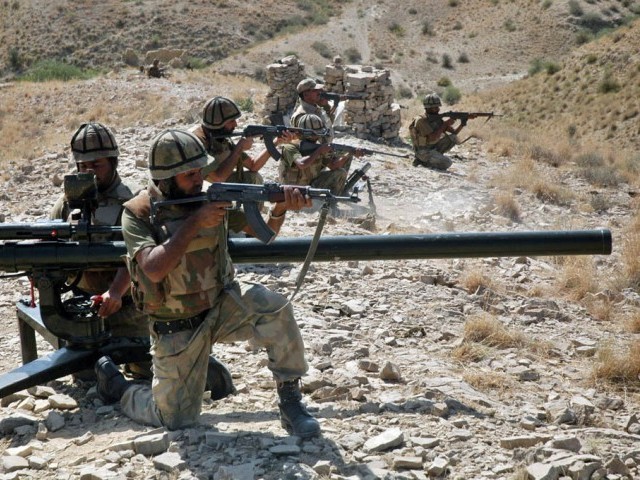 PESHAWAR: In a brazen cross-border assault that is likely to further ratchet up already tense ties between the two neighbours, terrorists from Afghanistan attacked at least three border posts on Monday in Mohmand Agency, killing five Pakistani soldiers.

One soldier was also reportedly killed in Khyber Agency as a
result of firing from Afghan territory.

The Mohmand attack claimed by Jamaatul Ahrar (JuA) — a breakaway faction of the outlawed Tehreek-e-Taliban Pakistan (TTP) — was carried out almost immediately after the final of the Pakistan Super League (PSL) concluded in Lahore at around 1:00 am on Monday.

“There were some 300 heavily armed militants who tried to infiltrate from the Khadi Khel village of Sarkani district of Afghanistan’s Kunar province and attacked the check posts located inside Pakistan at Gora Parai in Suran sector of Mohmand Agency,” a senior security official told The Express Tribune.

According to a statement issued by the military’s media wing, the five soldiers were killed during an exchange of fire with the terrorists. They were identified as Naik Sanaullah, Naik Safdar, Sepoy Altaf, Sepoy Nek Muhammad and Sepoy Anwar.

The Inter-Services Public Relations (ISPR) said the army troops also killed over 15 of the attackers and injured over 20 terrorists.

“Effective presence, vigilance and response repulsed terrorists’ attempt,” the ISPR said, adding that “The Pakistan Army shall not spare any terrorist.”

After the attack, Pakistan lodged a strong protest with Afghanistan and Afghan Deputy Head of Mission was called to the Foreign Office for conveying Pakistan’s grave concern over the incident.

“The Afghan government was urged to thoroughly investigate the incident and take firm action against the terrorists operating from its soil to prevent recurrence of such incidents,” said the official handout.

The Foreign Office emphasised that cooperation from Afghan side for effective border management was important for preventing cross-border movement of terrorists and militants.

Army chief General Qamar Javed Bajwa also expressed grief over loss of precious lives  as he hailed the sacrifice made by brave ‘sons of soil’ and appreciated the response by Pakistani troops.

Emphasising need for physical presence on Afghan side of the border for matching and effective border security, Gen Qamar said terrorists were a common threat and must be denied freedom of movement/action along the border.

A senior security official told The Express Tribune that such attacks from the Afghan soil were bound to increase mistrust between the two neighbours.  Talking about border management mechanism, he said: “While we have a check-post at a maximum stretch of 2 km, the Afghan side is unregulated.”

He referred to a recent botched suicide attack on the Kharlachi border crossing in Kurram Agency, where, according to the official, the bomber was killed 200m away from Pakistan after being checked by the Afghan side.

Another official said there had been a total of 40 incidents of cross border assaults in Fata from January to October last year, 22 of them took place along border in Mohmand and Bajaur areas.

“While there has never been any succession in the cross border assaults their intensity seems to have increased in recent months,” he said, adding that the number of terror incidents has been the highest in Upper Mohmand at Baizai sub-division. [WITH ADDITIONAL INPUT FROM OUR CORRESPONDENT IN ISLAMABAD]