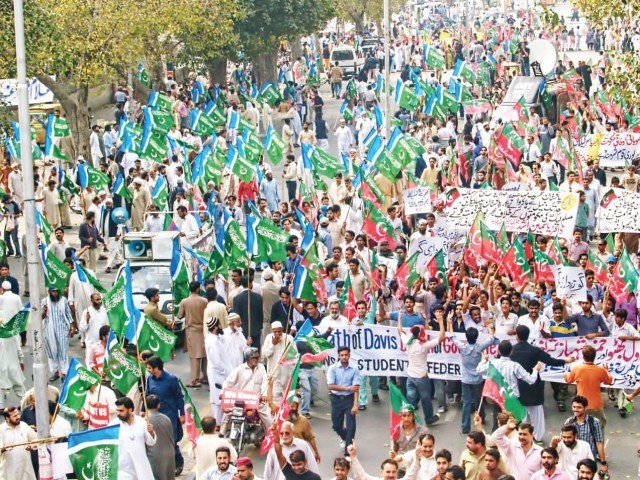 Activists from several political parties and other groups including the Pakistan Tehrik-i-Insaf, Pakistan Muslim League (Q), Jamaat-i-Islami (JI), Jamatud Dawa (JD), Islami Jamiat Tulaba (IJT) and Insaf Students Federation (ISF) held a joint protest rally on Friday against the release of US citizen Raymond Davis and vowed to continue the protest campaign till the governments were changed.

The protesters including men, women and children, were seen carrying party flags and banners denouncing the federal government as well as provincial governments. The protesters chanted also slogans against the intelligence agencies accusing them of mismanaging the Davis release.

Addressing the rally JI Ameer Syed Munawar Hasan said that the Punjab government was responsible for helping Davis flee the country. “Both the provincial and federal government are working for the Americans from day one. They do not serve the interests of Pakistani citizens,” he said. Hasan called the Sharif brothers traitors saying, “Although Zardari, Kiyani and Gilani have all damaged the country, no one has done more damage than the Sharif brothers.”

Hasan said that the ISI had begun coordinating with the CIA and was involved in killing innocent Pakistanis.

JD leader Ameer Hamza said that anti-state actors had hijacked law and order in the country.

“They are trying to blame religious people for their own failures to do their duty and protect Islam. We actually caught a murderer they let him go,” Hamza said. “The religious parties should unite against this government and put the country back on the right path,” he said.

PTI secretary general Dr Yasmin Rashid said that they would continue protests till the ouster of all Americans from the country. “The government has sold out for cash,” she said.

The protesters gathered near Masjid-i-Shuhda and marched towards the Punjab Assembly building. The speakers delivered their speeches at Charing Cross. Access to all shops on The Mall was blocked during the protest and traffic remained suspended for over three hours.

The Lahore High Court Bar Association (LHCBA) also observed a black day on Friday to protest against the government for letting Davis go. The lawyers hoisted black flags at the bar building and wore black armbands. The lawyers also observed a complete boycott of the courts proceedings.