US cooperation needed as asylum seekers flow into Canada

US cooperation needed as asylum seekers flow into Canada 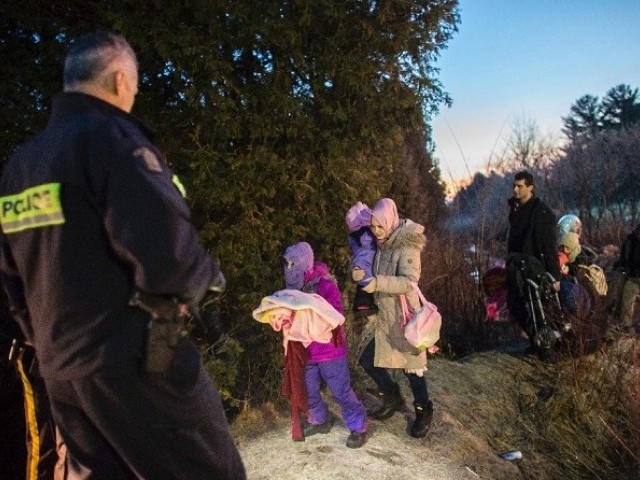 Police officers look on as a family from Turkey illegally crosses the US-Canada border just before dawn on February 28, 2017. PHOTO: AFP

With US President Donald Trump beginning to tighten enforcement of immigration rules, and more than 11 million undocumented migrants living in the United States, crossings into Canada have been increasing since the beginning of the year.

“We need to have a very good cooperative, seamless arrangement with the US to fully appreciate where the flow began, and all of the factors that are contributing to the migration,” said Public Safety Minister Ralph Goodale during a visit to Emerson, Manitoba.

Refugees make up bulk of crossings from US to Canada: UNHCR

The recent wave of migrants to Canada originated mostly from East Africa and war-torn nations such as Syria.

“We need to make sure that we all have the same data and information about the makeup of this migration. It is clearly affecting Canada as the migrants come across the border,” Goodale said. “The Americans have indicated that they are equally interested in fully getting the facts and understanding the genesis of this and we will work collaboratively and seamlessly with them.”

But he did not say what that cooperation would look like, or when it would happen.

Federal police and immigration officials said some refugees appeared to have intended from the start to come to Canada after flying to the United States on a visitor visa. Others decided to come only after they were denied asylum south of the border, or because they feared deportation amid the current US crackdown.

From January 1 to February 21, a total of about 4,000 people filed refugee claims in Canada, up from 2,500 during the same period last year. The figure includes border jumpers and those arriving from the United States at border checkpoints. Local officials say at least 180 asylum-seekers have crossed the border near Emerson since January.