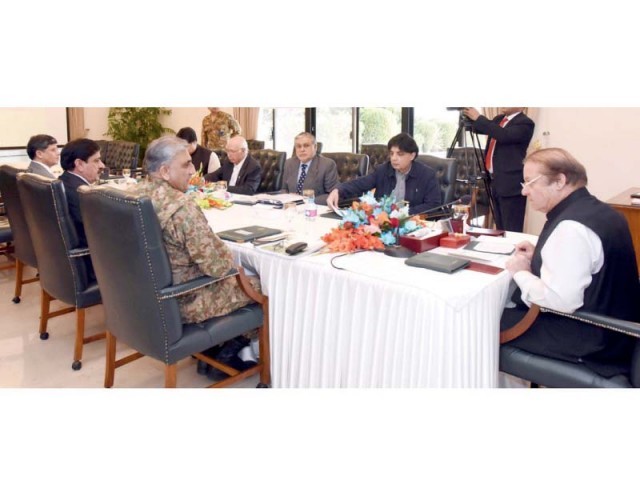 ISLAMABAD: Pakistan’s frontier with Afghanistan will remain closed until the border regions are purged of remnants of terrorists. The decision was taken in a high-level huddle of the civil and military leaders which was convened on Friday to review the gains made thus far in Operation Radd-ul-Fasaad.

“Currently, cleansing and combing operations are under way in the border regions. It is not advisable to open the border in the middle of these operations,” an official source told The Express Tribune quoting participants of the meeting.

The security officials and the interior minister, in their briefings to the prime minister, reportedly recommended that the border should stay closed. After a detailed discussion, the participants decided to diplomatically counter Kabul’s demand for reopening the border and to resist any pressure in this regard, the source said.

Kabul has been urging Islamabad to reopen the border since it was closed on February 16, after 88 people were killed in a suicide bombing at the shrine of popular Sufi saint Lal Shahbaz Qalandar in Sehwan, Sindh.

“We will open the border on our own terms, not someone else’s,” an insider told The Express Tribune. “Opening it without putting in place proper surveillance and immigration procedures will be a huge risk. Miscreants hiding in Afghanistan take advantage of the porous border and infiltrate from multiple entry points.”

The civil and military leadership also renewed their pledge to press ahead with the ongoing countrywide anti-terror drive with ‘the fullest might of the state’ and without “any discrimination based on geographic region, colour or sect”.

Sources said the Rangers action in Punjab was also discussed in the meeting, and the premier was updated on the recent arrest and elimination of terrorists. The paramilitary force rounded up dozens of terror suspects from Rawalpindi, Islamabad, Rojhan, Layyah, Dera Ghazi Khan and Attock on Friday.

According to a statement issued by the Prime Minister House, the meeting participants unanimously resolved to continue the anti-terror swoop until all set objectives are achieved. “The operation reflects the unilateral national resolve and commitment of complete obliteration of terrorism from the entire country.”

It quoted the premier as saying that “across the board consensus among all stakeholders and the overwhelming sentiments of our people to get rid of terrorism and extremism guarantee a comprehensive win in this war.”

“Pakistan has given immense sacrifices in its own war against terrorism and we are fully determined to remain steadfast in our commitment and duty to undertake all steps for eliminating terrorists without any discrimination of geographic region, colour or sect,” he added.

The participants agreed to continue the offensive against terrorism and extremism in its all forms and manifestations “with the fullest might of the state … [to] get rid of irritants in our collective objective of ensuring a secure, peaceful, and stable Pakistan.”

Speaking to The Express Tribune, Prime Minister’s Adviser Ameer Muqam said, “The closure of border with Afghanistan for ensuring foolproof security measures is Pakistan’s prerogative. It won’t be closed forever… [but] proper arrangements need to be made before it is reopened.”

He sought to quash the impression that the Pakhtuns were being targeted with the border closure. “I’m Pakhtun myself and I don’t buy any of this. The border has been closed for security reasons and has nothing to do with any ethnicity.”