He told Kaur that she now has a brothe­r, albeit from the "dushma­n desh"
By AFP/News Desk
Published: March 3, 2017
Tweet Email 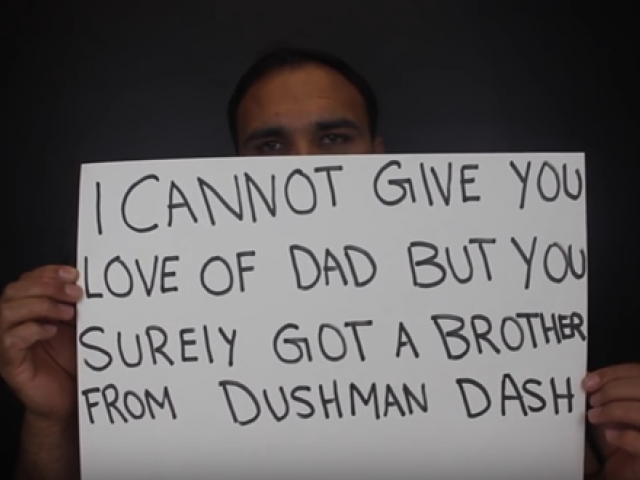 Calling himself Kaur's brother from the "dushman desh" he says he is surrounded by thousands like her. PHOTO: SCREEN GRAB

The past few days have been difficult for Gurmehar Kaur, a student of Delhi Univesity. The 20-year-old triggered a controversy after she criticised Akhil Bharatiya Vidhyarthi Parishad (ABVP) students’ union over its role in campus violence. This was followed by a video post which show her holding a placard which read, “Pakistan did not kill my dad, war killed him.”

Following the video, Kaur received threats from the public and was accused of being brainwashed by political figures. Amid the threats, she had to leave Delhi as she feared for her safety.

One of her supporter is Fayaz Khan, a Pakistani national who currently lives in Australia. He uploaded a video of similar format on YouTube. Khan, who hails from Swat, states that he has “seen war and death very closely in my home” and sympathises with Kaur.

Calling himself Kaur’s brother from the “dushman desh” (enemy nation), Khan says he is “surrounded by thousands of Gurmehar Kaur”. He vows to fight the restrictions between the two neighbouring states through understanding and education. Peaceful conditions between the two countries will mean no one else would have to suffer the loss of losing a loved one through war.

Kaur also received support from India. Hundreds of students from several colleges in New Delhi took to the streets to protest against the threats and recent campus violence, amid an on-going debate on nationalism and the fear of muzzling freedom of speech.

The video of support can be seen here:

This story first appeared in The Quint