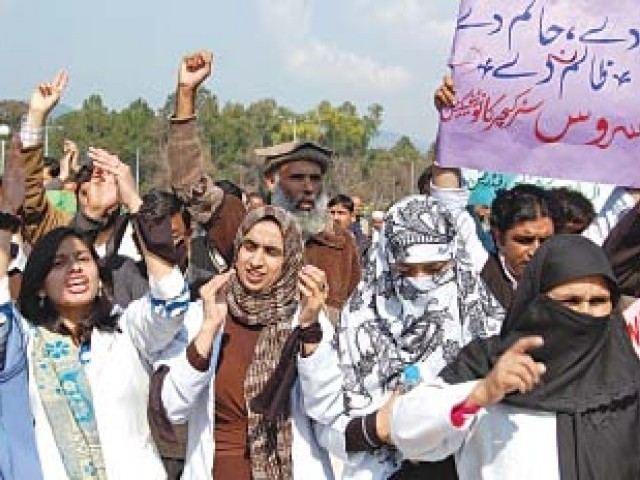 Paramedical staff chant slogans for their demands at PIMS. PHOTO: THE EXPRESS TRIBUNE

ISLAMABAD: The Young Doctors Association (YDA) Islamabad Chapter continued their token strike at the Pakistan Institute of Medical Sciences (Pims) on Wednesday. President of YDA Islamabad Chapter Dr Sajid Abbasi said, “An application will be sent to the secretary health in which we will mention all our demands.” He said they want a revision in their pay scale and salary structure. “We want a sufficient raise in our salaries,” he said.

“If any doctor of YDA Punjab chapter is arrested by the Punjab government, we will close all the hospitals in the federal area and will give full support to our colleagues,” Dr Abbasi said.

The YDA strike in Islamabad that started on Monday, however, is symbolic and all the doctors are performing their duties, he added. He said the doctors would continue their work in the hospital wearing black bands on their arms as a token of protest and decide on a strategy for the future in their next meeting.