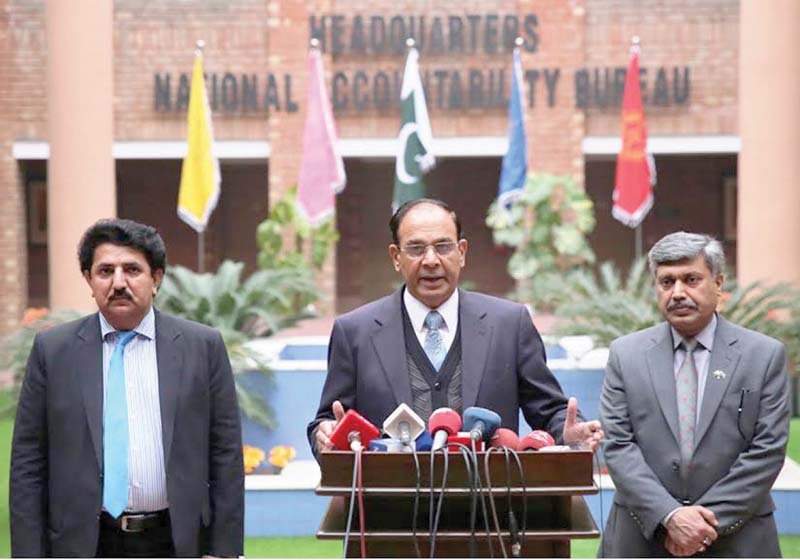 ISLAMABAD: The head of the country’s anti-graft watchdog has refused to challenge the Lahore High Court’s 2013 verdict which quashed the 17-year-old Hudabiya Paper Mills reference against the Sharif family.

National Accountability Bureau (NAB) Chairman Qamar Zaman Chaudhry on Tuesday told the Supreme Court bench hearing the Panamagate case that he will stick to his earlier stance when asked by the judges whether or not he intended to file an appeal against the LHC verdict on the Rs1.2 billion case.

On receiving the NAB chief’s reply, the bench told him to be ready to face consequences as the court cannot force him to file an appeal at this stage. Justice Asif Saeed Khosa – who is heading the five-judge bench – observed that Chaudhry will not remain in his current position if the court, in its judgment, rules that he acted out of malice.

Another judge observed that the NAB chairman, being a holder of public office, had breached the fundamental rights of the people by not filing an appeal in the Supreme Court.

The Sharifs’ legal team is also unhappy with Chaudhry’s stance of not filing an appeal out of fears that this move may be damaging for their clients, a senior Pakistan Muslim League-Nawaz leader told The Express Tribune. “Our legal strategy had been to secure the prime minister in the case, but the NAB chairman through his stance has invited the bench to give a declaration, which may severely affect the premier,” he said.

Another PML-N lawyer has also criticised Finance Minister Ishaq Dar for instructing his counsel Shahid Hamid to give lengthy arguments on the Hudabiya Papers Mills case.

During the hearing, Justice Khosa wondered why NAB didn’t pay attention to the opinion of an LHC judge who called for reinvestigating the Hudabiya case. He also questioned the referee judge’s verdict which opposed reinvestigation.

“I am surprised to notice that the LHC referee judge made observations on points which were not even referred for adjudication,” Justice Khosa remarked. He said the referee judge was just asked to decide whether the high court, after coming to conclusion that the reference and subsequent proceedings taken are liable to be quashed, can make an observation that NAB authorities are competent to proceed against the petitioner (Sharif family).

Justice Azmat Saeed Sheikh observed that the references were filed against Sharif family by NAB not Punjab police 17 years ago. When the NAB chairman stated that the department took the decision of not filing an appeal after consulting all relevant officials, Justice Azmat observed that there is nothing legal in that legal opinion. The bench also pointed out that then Prosecutor General NAB did not oppose the filing of appeal against LHC verdict.

The bench grilled the chairmen of both NAB and the Federal Board of Revenue (FBR) for not taking appropriate steps to investigate the Panama Papers scandal.

During the proceedings, the court asked the NAB chairman about the steps undertaken by the accountability watchdog in the Panamagate case. In his response, Chaudhry said he was waiting for the clearance of the ‘regulator’ in the matter.

Upon this the bench expressed wonder, asking who the chairperson’s regulator was. “Are you regulated by someone?” Justice Gulzar Ahmad asked the NAB chairman.

At the start of hearing, the bench observed that FBR took one year for the verification of suspects named in the Panama Papers scandal. When FBR Chairman Dr Muhammad Irshad stated before the court that Prime Minister Nawaz Sharif’s son, Hussain Nawaz, was not a resident of Pakistan, Justice Azmat asked if he checked travel history of the premier’s son to check how many days he spent in the country.

Justice Khosa said criminal cases had been registered against the ruling family since 1994 as money was allegedly laundered, asking whether FBR took any action. Justice Gulzar observed that functionaries of the state were not doing their jobs. Justice Ejaz Afzal Khan asked if FBR high-ups were not taking actions against the rulers because they were being appointed by those who are at the helm of the country’s affairs.