The activi­sts demand­ed the report about semina­ries in Sindh be made public­
By Z Ali
Published: February 21, 2017
Tweet Email 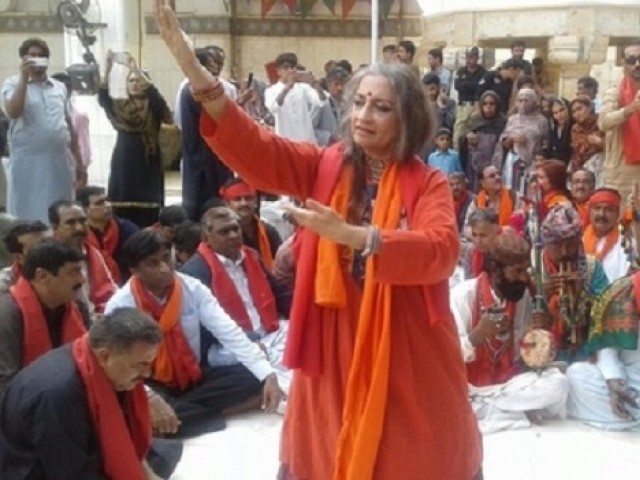 HYDERABAD: The barbaric suicide attack at the shrine of Hazrat Lal Shahbaz Qalandar in Sehwan took 88 lives and left hundreds injured but it failed to dent the bond between the devotees and their saint.

Displaying imperturbability and a determination to stand by the values of harmony, tolerance and freedom of expression, civil society representatives from different parts of Sindh gathered at the shrine on Sunday to stage a protest walk from Jahaz chowk to the shrine, at the end of which, classical dancer and social activist, Sheema Kermani gave a passionate performance.

Clad in an orange-coloured dress that symbolises the attire of the Sufis, Kermani danced in the shrine’s compound while a group of folk singers from Badin, Nanga Fakir, sang praises of Qalandar. 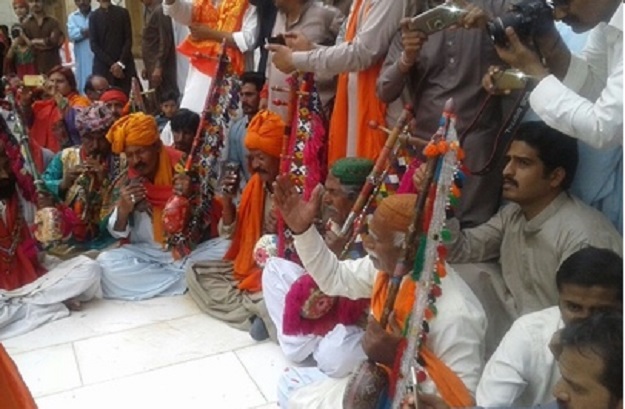 “The idea was to tell the perpetrators of terrorism that nobody can stop dance and music. These are part of our heritage, our culture,” Kermani said while speaking to The Express Tribune. “We also wanted to convey resistance to extremism, fanaticism and terrorism.”

The artist intended to perform ‘dhamaal’, the ecstatic spiritual dance which the saint used to perform in his life. Dhamaal is played on the beat of the naghara – a percussion instrument, and scheduled after Maghrib prayer. 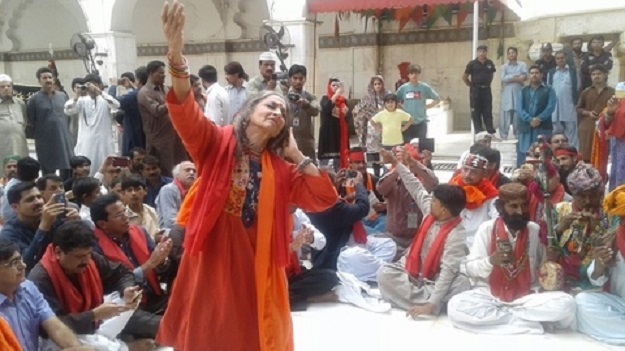 Kirmani says that the people who do not like the culture of shrines do not have to go to these places.

The protesters carried banners that said “Don’t accept religious terrorism,” while another banner questioned the state over the loss of innocent lives. 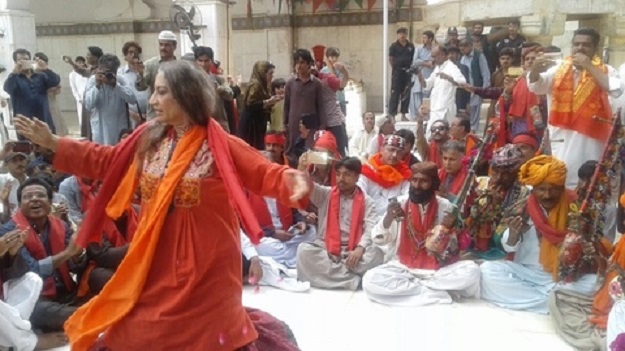 A statement by the Civil Society participants said that the “attack on Qalandar’s shrine is an attack on Sindh, its peace and culture.”

Activists including Javed Qazi, Raheema Panhwar, Sadiqa Salahuddin, Haseen Musarat, Naseem Jalbani, Amar Sindhu, Waheeda Mahesar and others demanded that the report about seminaries in Sindh prepared by Additional IG Sanaullah Abbassi should be made public.

“The foreigners from Afghanistan, India and Bangladesh are committing terrorists and crimes,” alleged Punhal Sario, a peasants rights activist, demanding decisive action. He accused the security establishment of Pakistan for failing to decimate terrorism in the years following the 9/11 attacks in the US.